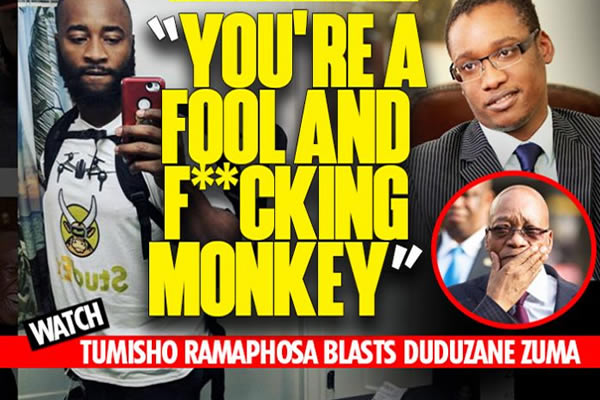 Tumelo Ramaphosa’s father has described his son’s controversial clip as ‘extremely unfortunate’.
After President Cyril Ramaphosa’s son Tumelo called former president Jacob Zuma’s son Duduzane a “fool” and a “monkey” on Instagram, the president’s spokesperson Khusela Diko reportedly says Tumelo will have to speak for himself.

The Sowetan reports that Diko said he was a “grown man” responsible for his own actions. Ramaphosa is in England hoping to woo investor capital to South Africa from the Commonwealth.

She reportedly said Ramaphosa, however, found the behaviour “extremely unfortunate and distasteful and not in keeping with the values he espouses or the manner in which he would expect anyone to conduct themselves”.

Although Tumelo deleted the video shortly after posting it this week, it was captured by others and reshared.

In the video, he records himself and says: “I’m in Dubai … Dubai and State Capture; [he then laughs] where are all those fools like Duduzane and all those f**king monkeys? Anyway, people like me are blockchain specialists and economists.”

Tumelo was attending a blockchain economic gathering. He loves Bitcoin.

He also showed off his fancy hotel room at the Jumeirah Beach Hotel. Duduzane Zuma reportedly owns a swanky apartment in Dubai at the Burj Khalifa skyscraper. It’s understood he may be in Dubai with his business partners the Guptas.

Many have criticised the clip, with one Twitter user writing: “South African media has aggressivley character assasinated Robert & Chatunga – Mugabe’s sons but I doubt they were brazen, condescending & black-hating snobs as Tumelo – Cyril Ramaphosa’s son! How do u call Black ppl fools & monkeys?”