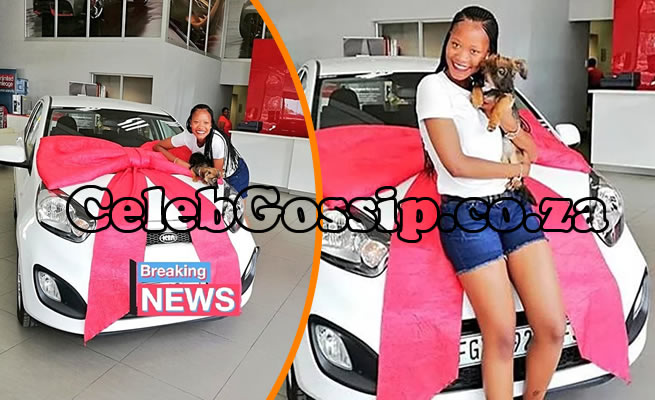 Nonhlanhla Qwabe popularly known as Skolopad recently surprised her 18-year-old daughter with a car as an early Christmas gift and in celebration of making it to grade 12.

The girl who is Skolopad’s only child, was completely surprised when she arrived at the dealership and was handed a set of car keys for her new wheels.

“She was so happy and excited, she couldn’t believe the car was hers. I told her that now this is your responsibility and this car is not for boys,” said Skolopad speaking to Drum.

She wanted to thank her daughter for being respectful. So Skolopad decided to buy her only child a new car on Friday in Bethlehem, Free State.

Skolopad, whose real name is Nonhlanhla Qwabe, said she decided to buy her daughter a car to show her appreciation.

She posted photos of her daughter, Amzozo Qwabe (18), with a new white Kia Picanto and wrote on Instagram: “Buying her a Christmas gift and she made it to grade 12.”

In the video, which went viral, her daughter is seen with the new car and a puppy.

Skolopad told Daily Sun: “I bought the car to show appreciation to my only child. She has been encouraging and supportive.

“She has her weaknesses, just like any child, but she also has a matured discipline. Many kids her age have kids, but my daughter has respect.”

The local entertainer who was involved in a tragic car accident earlier this year said that she decided to get her daughter a car because she loves to drive and as a token of her appreciation.

“I didn’t know what to get her that would make her happy because she’s been through a lot this year, from losing her father in January to having to support me after my accident,” explained the nurse.

“I just wanted to get her something that would make her happy and she loves driving so I thought, well why not a car.”

Skolopad said she was forced to teach her daughter to drive after she could not find anyone to drive her around when she was sick.

“She got her learner’s licence last year and got her licence this year. She has been driving me from Joburg and she is a good driver.”

In another video, Skolopad is seen driving behind her daughter in Bethlehem traffic.

”She was very happy. I took her to fetch the car after we collected her school report. She passed and will be in grade 12 next year. She will need the car for extra classes,” said Skolopad.