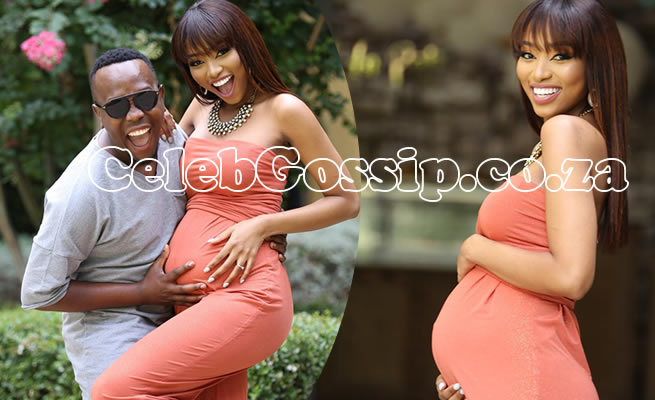 Khaya and Ntando tied the knot last year after a whirlwind three-month romance.

The celebrity couple made the surprise announcement by sharing pictures of Ntando’s growing baby bump on Instagram over the weekend.

Dressed in an orange jumpsuit, Ntando looked every bit the glowing mama-to-be.

“The most beautiful part of life,” Ntando captioned one of the snaps.

Khaya gushed over his wife for carrying their unborn prince or princess.

“Thank you for carrying one of the greatest blessings in my life. May God bless this journey babe. Now is it a boy or girl?,” he said.

Rumours surrounding Ntando’s pregnancy had been swirling since October but the couple had been shy to confirm the news until now.

Fans suspected that the former beauty queen was expecting after Khaya dropped a major hint on Instagram.

“May that glow continue to grow,” he wrote.

Ntando and Khaya have been completely besotted with each other, and aren’t shy to flaunt their love on social media
“You possess strength, character, courage, and intelligence. Seeing you grow and become the woman you are always amazes me. The world is yet to see who God has made you to be. I have no idea what I did to deserve you. I love you, I honour you and appreciate you babe!” Khaya wrote about Ntando on her birthday in April.

It’s evident that this unborn child has brought an incredible amount of joy into Ntando’s life.

At the end of October the former beauty queen opened up about the pain of her dad’s death.

“It is difficult not having you around; it hurts and it’s confusing. My heart aches everytime I see the love of your life; the lonely hours she now has to live with. The waking up in the middle of the night and you’re not around. The days that are not filled by your voice,” she said on Instagram at the time.