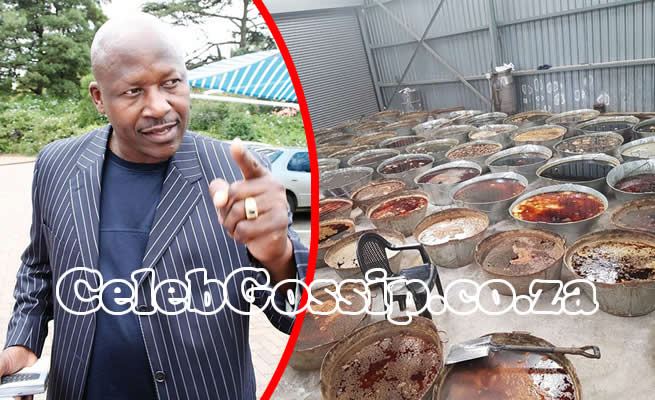 Soccer legend Mike “Sporo” Mangena intends to plead not guilty to a charge of having a drug manufacturing plant on his farm west of Johannesburg.

Mangena set tongues wagging on social media after he was caught on video chewing on an unknown substance that some referred to as muthi from inside a pocket of his blazer. The former Kaizer Chiefs, Wits, Durban Bush Bucks, Mamelodi Sundowns and Moroka Swallows striker has denied any involvement in the drug-manufacturing plant on his Hillside, Randfontein, farm. Mangena said he had no knowledge of what was happening on the property.

He was released on R50,000 bail which his lawyers paid to the clerks of the court in Randfontein magistrate’s court in cash. His three co-accused, however, were not so lucky after they abandoned their bail application as they are in the country illegally.

Mangena, through an affidavit read in court, said the plot on which the alleged drug manufacturing plant was discovered belongs to him.

“The said plot is divided into two portions. The one portion I utilise to farm on. The other portion is leased out through my estate agency,” he said.

“When I was confronted by the police in this matter I was informed by my staff at the estate agency that this portion is being leased to a person who goes by the name of Jury.”

He said he has submitted the copy of the lease agreement which started in May 2016 and ended in May this year to the investigating officer.

“On further inquiries I was informed that the same person (Jury) thereafter leased the property on a month-to-month basis. I was unaware as to what was going on at that portion of the plot or [for] what purpose the big corrugated iron shed was used by the person or persons who leased it,” he said.

Police raided the farm after a three-week observation by the Hawks, crime intelligence and anti-gang unit. The drugs-manufacturing barn was situated in the farm which also has chickens, goats, cattle and ducks.

Inside the barn police said they found a spillage dryer tank, gas cylinders, plastic drums and a number of zinc basins full of chemicals which were allegedly used to produce mandrax. Police said the drugs were produced on the farm but not packaged on the plot. They said at the time of arresting Mangena that electronic and physical surveillance were carried out on the property and modus operandi of the suspect “fully identified”.

Mangena told the court he has surrendered his passport. He has to report to Booysens police station every Monday between 6am and 6pm.

He is also not supposed to have any form of contact with any of his neighbours, workers or any local community member in Hillside.