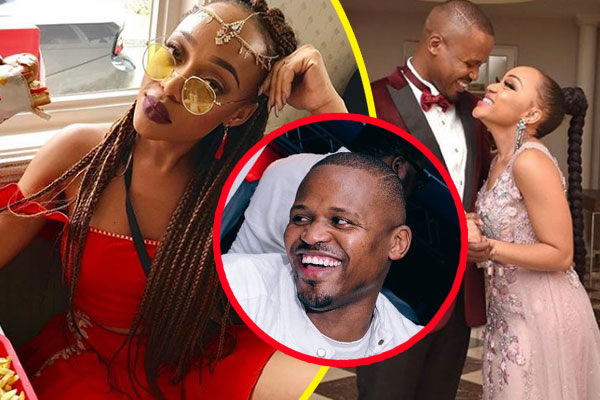 It's easy to mistake the petite TV star for a teenager when she jumps out of the gleaming white Mercedes Benz SUV, casually clad in an oversized pink T-shirt, a pink cap, fluffy socks and white sneakers.

Wheeling a large black and grey Louis Vuitton suitcase containing killer heels for her photoshoot with DRUM, Thando Thabethe certainly has the energy of a millennial on the move.

The 28-year-old livewire helms her radio show, The Thabooty Drive, weekdays from 3pm to 6pm on 5FM and shoots scenes for Thando Bares All, her talk show on TLC (DStv channel 135).


And as if that’s not enough, the busy bee has been zigzagging the globe as an ambassador of Cîroc vodka.

There’s no doubt she’s having a sensational year but it’s her role as girl-next door Linda Ndlovu in the hit show Housekeepers that Thando is most proud of.

She’s honoured to tell the story of the aspiring lawyer whose life is derailed with the death of her mother, Thando tells us. “Every actor wants to play a role like Linda Ndlovu in their career. A brave, fearless woman who overcomes so many obstacles, especially loss and grief.”

She was blown away when she read the script after being cast. “I couldn’t believe the number of hardships this young woman has to face in the story. She’s smart, hardworking and does what she needs to do, diligently.

“A lot of us would give up when faced with the same challenges. But she doesn’t and that’s encouraging to watch.” And viewers agree. Thando has become the talk of the town since trading her red-carpet designer dresses for an apron in the Mzansi Magic show.

Playing a leading lady with barely a stich of make-up is a side of her people haven’t seen before, and fans can’t get enough.

It’s easy to immerse herself in the character because she has so much in common with Linda, Thando says. “I got completely lost in her because we have so many similarities.”

Like Linda she knows the pain of losing a parent. Thando lost her father to suicide when she was a teenager.

“There was no way I was going to play that role well had I not used my personal experiences,” she says. “I relate to Linda’s story so much sometimes I find myself crying while reading the script.”

LIFE dealt Thando another blow three years ago when her brother, Sibusiso, was gunned down during a robbery.

“I’ve been through a lot,” she admits. “It’s not easy, but I see life as full of challenges we need to accept for us to grow and become better people.”

She pauses before continuing. “Maybe I’m being too hard. I don’t know, but when challenges come I don’t wallow in them.” It’s a cliché, Thando says, “but when life gives you lemons, you need to squeeze the hell out of them and make the best lemonade in town”.

Her motivation is knowing each day is another chance to do better. “I have sad moments too, but the fact I’m alive and have been granted opportunities gives me gratitude and keeps me encouraged.”

Last year the mover and shaker ditched her role as Nolwazi in Generations: The Legacy because she wanted to grow. “I left because I didn’t want the comfort of a soapie. There were also a lot of time constraints – I’d spend the entire day on set,” she says.

Thando was afraid to step away from the soap she’d grown to love, but “I needed to leave so I could open other doors for myself ”. The role of Linda, who wears her heart on her sleeve, couldn’t have come at a better time: she was nursing a broken heart after her five-year relationship ended and she relished the chance to get stuck into a gritty role.

There have been reports she’s rekindled her romance with former fiancé Frans Mashao, but Thando rubbishes the rumours. “We’re absolutely not back together,” she says. “That experience made me realise I’m stronger than I think I am. I look back at it and marvel at how I overcame it. I went through it, I overcame it and I’m out of it.”

The break-up was hard on her and she doesn’t want to reveal what led to the split but Thando says it’s made her realise what a strong, independent woman she is. “I stand on my own now, which is really cool. I feel I understand myself a little better,” she says.

“It wasn’t a great experience, but I’ve learnt I’m strong. I have no regrets about the relationship and the decisions I made before, during and after. Everything happens as it should.”

SHE’S healed from the hurt and hopes to find her Prince Charming one day. “I still believe in love. I’d love to find love again – I still want a happy ever after,” Thando says. “I hope to fall in love harder, but it all depends on the person I meet.”

But she won’t be sitting back while waiting for Mr Right. The multi-talented star plans to push herself even more next year. “People are quick to box others,” she says. “When they hear me on radio they don’t expect to see me acting on TV. It’s not fair as we should be allowed to explore without being labelled or limited.”

And she sees no reason why she can’t be a great all-rounder. “I want to focus on my DJing, acting and TV presenting.”

If there’s anything Thando has learnt this year, it’s that she has so much more to give. “Despite the challenges, it’s been a good year.”

She cites her biggest achievement as building her mom, Sibongile Thabethe (50), her dream home. “I demolished her old house and built a new home,” she says.

Next year she’s releasing a limited edition swim wear range under her lingerie line and she’ll be on the big screen too. Thando will star in Love Lives Here, a romantic comedy based on a soon-to-be published book written by local author Mokopi Shale.

The movie is set for release in March next year, and Thando is one of the film’s executive producers. She lights up as she gives us the scoop on the chick flick.

“It’s about a girl who falls in love with the wrong guy but ends up marrying the right guy – sort of like the happy ending to my story,” she says, then adds: “But I didn’t write the story and it was shot two years ago before my break-up happened, so people can’t say it’s about me.”