Home Celeb Gossip Joy as Mzekezeke bounces back, says he had been abducted 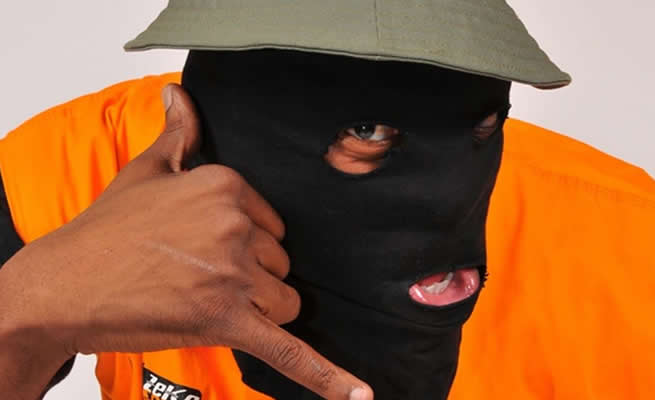 Mzekezeke recently made an appearance on SABC 3’s Trending SA where he spoke about his career and finally explained why he had been away from entertainment for so long.

Those of us who are old enough to remember the circumstances around his disappearance might have been shocked to hear the actual reason why the Kwaito star went missing. Mzekezeke first emerged in South African pop culture during the early 2000s, recording music and masquerading as a mysterious music-maker with high energy stage presence. He was also a prominent radio personality on YFM.

However, three albums later, amidst speculation that DJ Sbu was actually the man behind the mask, Mzekezeke disappeared and we didn’t hear from the musician for nearly a decade. That was until 2015 when he began performing again, building up to his grand return in more recent times where he has been interviewed by DJ Sbu (Mzansi still isn’t buying it…) and infamously been banned from entering the SABC for refusing to remove his mask.

Now, more than ever, we can truly say that Mzekezeke is back! But the question is, where did he go in the first place?

The musician spoke to the Trending SA panel and revealed the reason for his disappearance when he said: “I was abducted for the aliens. Now I am back.”

This isn’t the first time that we’ve heard this story.

Towards the end of October 2018, DJ Sbu spoke on behalf of his label-mate and claimed that Mzekezeke’s hiatus was the result of an alien kidnapping: “According to him he was abducted by aliens in Tembisa while conducting his taxi business where he owned about 100 taxis around Ekurhuleni. Apparently, he is now back to drop his new single titled Nay Lento this coming Friday afternoon. He was spotted this year 2018 June 16 in JHB CBD falling out of an alien spaceship,”

DJ Sbu is clearly enjoying this chapter of Mzekezeke’s career, but speculation that the two artists are actually the same person continues to do the rounds on social media. DJ Sbu’s various appearances alongside Mzekezeke have done little to quell the doubts of social media commentators:

Am i the only one who can see Dj Sbu under that Mask? #mzekezekemusic #Mzekezeke pic.twitter.com/lfi0AGDI9P

You can watch Mzekezeke’s full interview on Trending SA below: