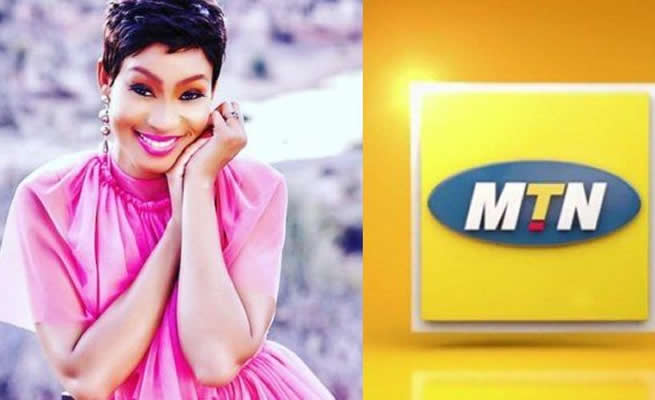 It’s a voice millions of South Africans are very familiar with – MTN’s voice lady telling users that they have run out of funds and how to top up.

But not many people – if any – guessed that the voice belongs to a very famous actress.

It turns out that Kgomotso Christopher has been doing MTN’s voiceovers for six years. How did we miss this?

She took to Instagram a few days ago to share a video of herself recording the voice prompts.

“Greetings from the MTN lady who tells you when “You have insufficient airtime to make this call,” she captioned the video.

Kgomotso’s followers could not believe what they were hearing, with someone even dialing MTN’s customer line to check if it really is her.

So I just found out that @kgchristopher is the lady that tells you” insufficient funds please recharge airtime “ on MTN and I even tried now it’s actually you. Wow ❤️❤️❤️ pic.twitter.com/WyoIZYQle5

“I never thought it could be an actual person,” one of her Instagram followers commented.

Another added: “I am sorry, but do you know how many times I have cursed you.”

One of the star’s fans asked a very important question.

“How does @kgchristopher feel listening to her voice when she wants to make a call 😊 or when she has insufficient balance?” a Twitter user asked.

Social media users were still coming to grips with the shocking news when Kgomotso dropped another bombshell.

She revealed that the woman who does South African Airways in-flight announcements is non other than Scandal! actress Lusanda Mbane.

“… ironically the SAA voice on flights who does the announcement about in-flight safety i.e. ‘Sawubona and a warm South African airways welcome…’ is none other than our Mamakhe 👉🏾 @lusandambane on @etvScandal

So Kgomotso Christopher is the one stealing our airtime ever since my airtime was disappeared pic.twitter.com/p2WIlsjH2Q

Bathong all this years we been saying mosadi wa lekgoa🤣🤣🤣🤣 pic.twitter.com/UBufc7bl7K

😂😂😂😂😂 @kgchristopher you the best….Television and Voiceover artist 👌💯massive talent ahhh ,I was not expecting this…..this just killed me🚶 pic.twitter.com/CEKCpQ6iCE