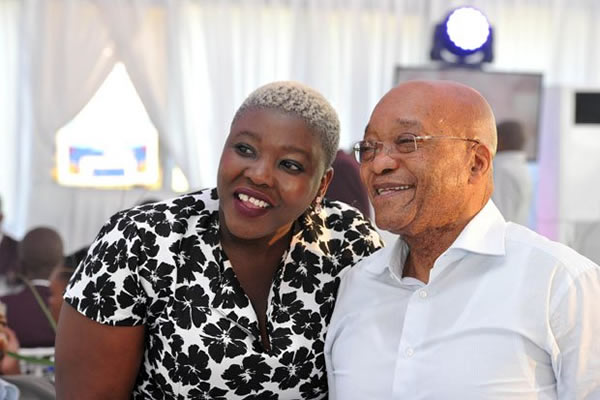 The pressure comes from friends, colleagues, distant relatives, you name it. It isn’t always easy to laugh it all off and tell people to mind their own business – but for comedienne Celeste Ntuli (39), the badgering has come with a surprising plus side: she’s the perfect person to play the lead role in the new movie Looking for Love.

In this local romantic comedy she plays a 38-year-old woman, Buyi Dube, whose parents are worried she’s wasting her life working meaningless jobs. When her younger sister gets married , Buyi’s parents insist she takes her head out of the clouds and focus on finding herself a good man and settle down.

Buyi is gutted and off she sets to find Mr Right in a world full of Mr Wrongs. She’s been in exactly the same situation as Buyi, Celeste tells DRUM.

“No single woman is immune to the bashing of society. I’m a 39-year-old woman who is unmarried and has no children. Like many women, I’ve been in and out of relationships and they just don’t work. I suppose those are the things I share with Buyi, but there are a lot of differences as well,” she says.

Unlike Buyi she’s not desperate to settle down.

“I’m not as crazy as she is – the lengths she goes to find a man are a bit extreme, you know, and she meets all types of different men that are just . . . no.”

The popular actress and funny woman says while her immediate family doesn’t judge her for being single, some extended family members have been known to remind her that her “biological clock is ticking”.

“Society has been conditioned to think a woman who hasn’t had a man for most of her life – like me – is a broken woman, there’s something wrong with her. But that’s so wrong, it’s a distorted view of life,” Celeste says.

“A woman can be successful and happy doing what she loves, but people will choose to see things that don’t exist – like imaginary sadness. What is that? Take me for example: I’ve learnt to love myself and accept myself just the way I am. I love me and because of that there’s a certain standard I require to be loved and respected – the way I do it. Now enter a man in my life, I’m expected to drop my standards so I can accommodate him. Why’s that?”

Looking for Love was co-produced by Celeste, Malebo Manamela and Aimee Dherman. The hilarious movie follows Buyi as she returns from her hometown in KwaZulu-Natal feeling hopeless about love.

Where is a heavyset black woman going to find a man in South Africa, she thinks?

Desperate, she reluctantly allows her sexy best friend, Lindi (played by Phindile Gwala), to help find her a man in the elusive “man market”.

Along the way she meets a quirky magician with a cat obsession and a sex addict who can’t get enough of a big butt.

Many women navigating the often-dodgy dating world will be able to relate.

It’s a tough jungle out there, Celeste says – but there’s absolutely nothing wrong with choosing to spend your life alone.

Except for the occasional “lonely night in cold winter times” there are certain pros to being alone.

“When you’re single you’re so much more in touch with yourself. I’ve grown so much in my life – spiritually and otherwise. I’m more aware of who I am and who I’m still developing into,” she says.

“Also, when you’re single, you perfect the art of controlling your life to fit your preferences and priorities. So much so that when a man enters your life they only complement what you already are. They know that ‘this woman is whole, and I am not here to control and dictate her life – because she won’t allow me anyway’,” she says with a confident smile.

Celeste wanted people to know the daily realities faced by single women nearing 40, which is how the movie – which also stars Trevor Gumbi, Lillian Dube, Allen Booi and Craig Urbani – came about.

Celeste is a regular feature in the Blacks Only comedy shows but she’s also fast making a name for herself in the acting industry “even though I don’t have an acting qualification”, she says.

She made her debut on television as Siphokazi Zungu on Isibaya in 2013, where she played one of Mpiyakhe Zungu’s (Siyabonga Thwala) wives.

Isibaya’s setting is in eBhubesini, in rural KwaZulu-Natal, where Celeste’s role as the first wife is to cook, clean and take turns in catering to her husband’s needs in the bedroom.

Occasionally she sits on the board of the council that rules the village and helps to make major decisions.

She left the show last year although there are rumours she may be back.

She loved playing Siphokazi, Celeste tells us. It was fun and challenging.

“I learnt a lot while playing her – I had to remove myself from me and be open to fully portraying her. “It was difficult, but it was worth it. I mean, I’ve never been married, let alone been in a polygamous marriage – but I had to learn when you have a husband this is how you address him and treat him.”

She was so convincing the stand-up comedienne was often confused with her character by fans of the show, she says.

She also got to play around with wardrobe, which she enjoyed.

“When I do shoots now I insist that I either want to dress myself or I give the stylist a very detailed brief. I don’t like being put in old-looking dresses and clothes for old people. I’m a big girl, but that doesn’t mean I must wear boring clothes. What on Earth?”

The show allowed her to represent ordinary people, she says. “And that matters to me.”

“But I’ve also decided to take a break from the soap opera and explore other roles to show my skills and learn more,” Celeste adds.

She took time off the show to take her one-woman stand-up comedy show, Black Tax, on the road.

It wasn’t long after she finished her nationwide tour that another opportunity came knocking. This time she gets to flexmher acting muscles as Governor Lindiwe on Mzansi Magic’s popular prison drama Lockdown.

It’s totally different to everything she’s done before, she says. “Lockdown is very challenging but rewarding at the same time. Mandla N [the director] is something else – he manages to push us and make us do things we didn’t even know we could.

“I’m blessed because the women I work with are also such amazing actresses. We often shock one another with our performances.”

Although she’s made it crystal clear she has no problem with being single, Celeste isn’t opposed to the idea of having a husband and children one day. If it happens, it happens, and meanwhile she’s focusing all her considerable energy and talent on her acting and her standup work.

“I just want to take on more roles and keep growing and learning.”

Celeste is hard to miss with her signature short blonde hairdo.

She’s seldom seen without a smile and her eyebrows are always perfectly groomed – they’re her trademark, she says.

The KwaZulu-Natal-born actress recently celebrated her 39th birthday with an intimate gathering of friends at a white, silver and gold-themed party, posting, “Barefoot happy and a year older!!! Live love laugh light!!” on the day.

Forget the people who think she can’t be happy without a man by her side – as far as she’s concerned, she’s living her best life. “I mean, I wake up in the morning and work. My hours are crazy, but I do it because I love it – and I need to eat!”

If she were to open the door to a man it would have to be someone special.

“So, naturally, I’d go for a man who shares the same amount of passion and my work ethic for whatever it is he has chosen. But what society says is when I look for a man I must ask:

‘Does he walk, does he talk?’ and that should just be good enough.

“But that doesn’t make sound sense to me.”

Celeste says being single isn’t a problem for her and other women should understand that too.

A man who is interested in you and wants to be with you will make sure he is.

“If he wants me he will show it. Another problem is men don’t want to work for anything anymore – they want easy things, quick fixes. So when they meet a woman who knows who she is they don’t know how to act because they suddenly realise they’re not in control.”

She insists women shouldn’t buy into what society is selling them.

“There’s nothing wrong with you if you’re single and don’t have any children. When a husband and children do come into your life it’s a blessing. But not having them isn’t a curse and it takes absolutely nothing away from who you are.”