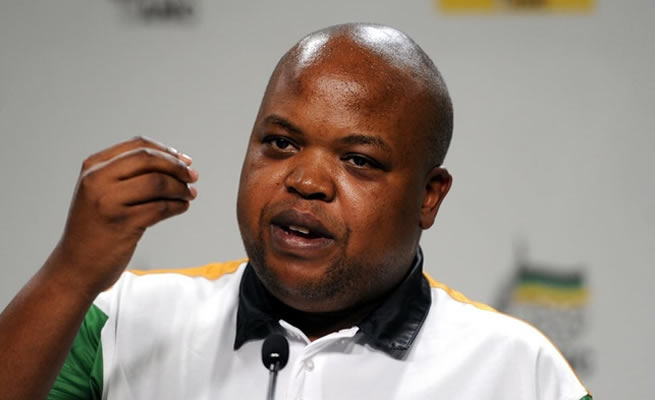 ANC Youth League president Collen Maine’s marriage is said to be on the rocks.

Several well-placed sources claimed that Maine’s wife, Kelebogile (33), has moved out of the house they shared, after she discovered that Maine (35) was allegedly entertaining himself with other women outside his marriage.

Two sources told City Press this week that Maine and Kelebogile are going through a very difficult time, but they are trying to keep it under wraps because they don’t like airing their dirty laundry in public.

City Press has learnt that things got ugly in two family meetings. Kelebogile allegedly told the family elders that she had tried so many times to give Maine a second chance, but that she was tired of his infidelity.

“Even Maine’s parents tried to save their son’s marriage, but it seems both families have failed. As a result, Kelebogile has since decided to pack her bags and leave the opulent double-storey mansion they shared in Tshwane,” said sources close to Maine.

Another source said that, even after the two family meetings, there was little the relatives could do to help fix their marriage. “It is clear that Kelebogile has made up her mind. Maine has hurt her so many times,” said the source.

Asked for comment, Maine laughed. “This is a joke,” he said. “Even if this was the case, I don’t discuss my private life with the media. Your source is very unreliable and desperate. He does not know anything about my family.”

This week City Press tried to track down Kelebogile who has a number of accounts on social media. She used to work for the National Youth Development Agency, as well as a construction company. But aside from those details, she appears to have managed to keep her private life very private.

The two, both of whom are from North West, have been together for more than eight years.

Several attempts to contact Kelebogile this week were fruitless. She did not respond to messages or emails.

But this is not the first time Maine has allegedly cheated on his wife.

Three years ago, when he was still North West MEC for local government and human settlements, Sunday Sun reported that he cheated on Kelebogile with another woman.

It was alleged he had been caught red-handed with another woman in Mahikeng.

The tabloid alleged that an angry Kelebogile broke all the windows of their house using rocks and a steel pipe.

At the time Maine complained about the story to the press ombudsman, but the complaint was dismissed.

Maine is serving his last term as the leader of the ANC Youth League which is preparing to go to its 26th elective congress to elect new leaders in December.

Those in the know say the conference might sit only after next year’s elections.

The house Kelebogile moved out of could well have been the swanky golf estate home in Pretoria for which Maine received a cushy loan from the Gupta family.

City Press and amaBhungane reported two years ago that Maine and Kelebogile bought the R5.4 million property – with a R140 000 a month bond – east of Pretoria in 2015, six weeks after he was elected youth league president.

The double-storey, triple-garage home on a large erf in the Woodhill Residential Estate and Country Club backed on to the greens of an 18hole championship golf course.

Maine originally submitted a cash offer and the Guptas’ lawyer remitted the entire amount from the Bank of India.

In response at the time, Maine said: “I don’t know who is discussing those things with you. I have gone to the bank. I have got an agreement with the bank on how I pay the house for 20 years, so I would not then discuss my private issues in public any more.”

In April Maine admitted for the first time to meeting the controversial Gupta family.

“We must be honest about this comrades. Some of us did not take ourselves there, we were taken there.

“And I must confess that I was not taken to the Guptas by former president Jacob Zuma, but by Supra Mahumapelo, [the former North West premier]. And this is the truth,” he claimed.

Even Maine’s parents tried to save their son’s marriage, but it seems both families have failed. As a result, Kelebogile has since decided to pack her bags and left the opulent double-storey mansion they shared in Tshwane.