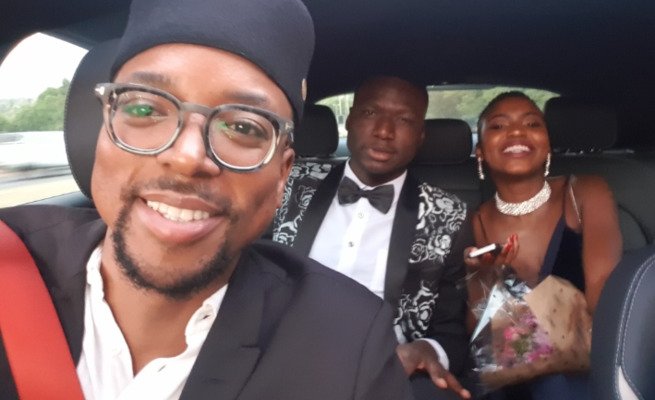 The end of the school year is coming to an end soon and with that comes matric dance season.

This of course gives our local celebs the perfect opportunity to make the dreams of a young fan come true.

From Bonang Matheba and Thando Thabethe giving away their red-carpet dresses, to celebrity make-up artists giving away free glam-overs and now Maps chauffeuring a couple to their matric dance, it really is the season to give back.

And what’s more, this gives our local celebs another photo-op moment to be seen doing some charitable work.

TV star, Masego ‘Maps’ Maponyane has joined the bandwagon of celebs chipping in to make someone’s big matric dance evening a memorable one.

Instead of the typical gesture of giving away a suit however, Maps chose to go the extra mile and actually drive a young couple to their matric dance, which obviously caused a huge stir when they all arrived.

Maps drove young couple, Lungi Dhladhla and her date to their big night.

“Got to chaperone this beautiful Matric Dance couple @lungidhladhla and @ovobuckets to their dance over the weekend, and we had such a good time,” said Maps.

“Maps Maponyane Thank you from the bottom of my heart for making our Matric Dance pretty epic. Literally the best night of my young life. P.s You’re the best uber driver that ever lived,” the young male matriculant said to which Maps responded: “This was a beautiful night man. Glad to have been a part of it as your uber driver for your big day Keep dreaming bro, you're destined for big things I hope you know that”.

Maps Maponyane is known for traveling while shooting for Top Billing and of course, living his best life! He recently took over Italy and France in one week. Maps revealed his different fabulous locations on Instagram with the great pictures of himself and of the beautiful architecture around him.

A few months ago he grabbed headlines for bad reasons following reports that SA it-couple, Nomzamo Mbatha and Maps Maponyane had split due to alleged cheating on his part.

Sources who were close to the starlet have since confirmed that Nomzamo Mbata, an Isibaya actress, was deeply devastated at the betrayal.

This was reportedly due to the fact that their relationship began as a friendship after Maponyane became a shoulder for Mbatha to cry on when she caught her then-fiance, Khaya Mthetwa cheating on her with her friend and Isibaya co-star, Jessica Nkosi.

The couple, who have become firm favourites on the celebrity scene and often referred to each other as ‘best buddies,’ apparently called it quits after cheating rumours involving Maps emerged.

According to sources close to the couple, Maponyane cheated with multiple women over the last few months, one of whom is believed to be Capetonian blogger, Nadia Jaftha.

CelebGossip.co.za really hopes that while Maps was busy driving the couple, he also advised them not to cheat on each other!