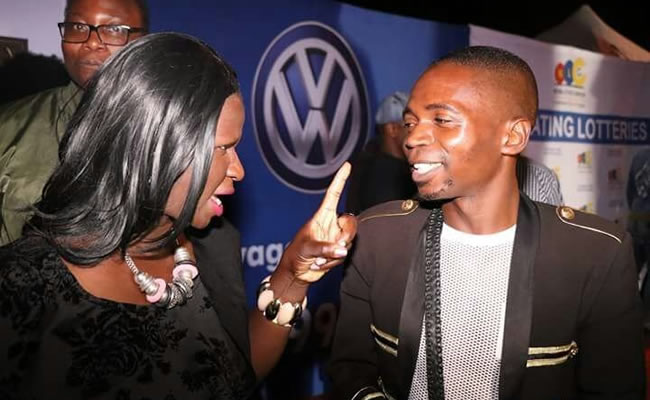 A Limpopo comedian was nearly moered for making ugly jokes about an actress.

The comedian, also known as SABC Livhu, received a stern warning when he met with the actress face to face in Thohoyandou Town Hall, Limpopo during the Tshivenda Music Awards (TSHIMA) on Saturday evening.

In the video that is making rounds on social media platforms, the comedian is seen trying to call the actress but she ignored him and when he was trying to update his audience about the actress, she confronted him and warned him to stop making jokes about her or else she will klap him.

Fheli broke into tears when Sunteam spoke to her about the video that is making rounds on social media.

“You know what… when someone makes jokes about you it hurts. This guy isn’t a comedian, it’s not a joke if you make fun of my physical appearance. Yes, my skin colour is black but it was never my choice to be black. It makes me angry when someone is making jokes about it,” she said.

Fheli says despite being an actress on Muvhango, she plays a big role in the community of Vhembe District and the funny videos about her physical appearance are destroying her emotionally.

“I have children and orphans that I’m raising too, they saw the videos in which this guy is making fun of me and they are hurt. That’s what makes me feel so emotional,” she said.

“At the end of the day we are making money with the trends we are making on social media with this jokes. I didn’t feel threatened when she approached me because I take everything as a joke. I have bodyguards and I told them not act when anyone come to me to beat me regarding the jokes I made. Just one klap, I will go to court and you will pay me for that. This is a game, we are hustling here,” SABC Livhu told Daily Sun.

The comedian recently made a funny video making jokes about celebrities like Jude Tshisevhe and Makhadzi's manager Rita Dee including Fheli the actress.

The comedian was arrested last year after he faked his grandmother’s death so that he can allegedly make claim for life cover policies.