Home Celeb Gossip Kelly Khumalo now a sangoma, after all her boyfriends either died mysteriously... 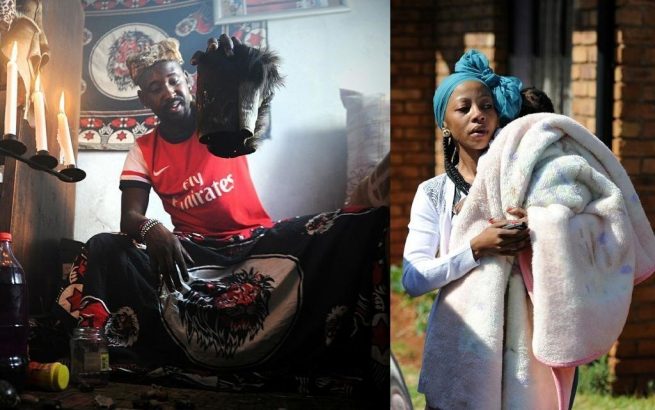 It seems songstress Kelly Khumalo has taken a decision to honour her ancestors and answer their calling.

This was confirmed by a picture she posted on instagram with a caption: “Use the power you have been given, Phakama, Nkosazane, Phakama Ndlondlo, Konke kungaphansi kwezinyawo zakho.”

On the photo she is seen wearing a traditional sangoma cloth and crystal clear beads around her neck.

Her fans congratulated her on answering her calling and some even said she inspired them to honour their own gifts.

@bongiwe_mbonambi said: “I’m so proud of you. Khula Ndlondlo this is the most painful but rewarding journey.

@exo_exo24, said “Mtane Dlozi, you won’t believe me but I saw you a long time ago. I really am not surprised by this.”

Kelly responded to most of the comments on her post and she responded like a true sangoma, using all the codes.

When Daily Sun contacted Kelly she was not so keen on sharing details about her journey.

“This is none of anyone’s business, I said what I said on my post but it concerns none of you,” said Kelly.

In 2014, a snagoma said Kelly must thwasa, or all her future boyfriends will die!

The sangoma, from KwaThema in Ekurhuleni, told Daily Sun then that he threw the bones – and they showed him Kelly Khumalo must become a sangoma.

He said then: “There’s an ancestor from her mum’s side who wants her to thwasa”.

“A dark cloud has always followed her, and the only way she can get rid it is if she accepts her calling and allows her ancestors to protect her,” he said. “People don’t understand what she is going through, even Kelly herself doesn’t understand what is going on in her life.

“More bad things will happen if she doesn’t follow the path she’s been chosen for. “She is unlucky in love, because her ancestors have turned their backs on her.” Makhosi also said Kelly needs to be cleansed by the Meyiwa family. “If she isn’t, her life will continue to be cursed,” he said. “I understand that she lives a different life at the moment, but she needs to go back to her roots and talk to her ancestors. “When you are chosen you are chosen. The ancestors won’t rest until you accept the gift they are giving you.”

In January 2015, a sangoma revealed that Kelly Khumalo's boyfriends will continue experiencing mysterious misfortunes until Kelly agrees to become a spirit medium as per her ancestral spirits demands. Her late husband-to-be, Senzo Meyiwa was mysteriously shot dead at Kelly Khumalo's family home in October 2014. Up to now it's only Kelly Khumalo and her close family members who really know what killed Senzo.

Kelly's other ex-lover, musician Molemo "Jub Jub" Maarohanye, languished in jail and was sentnced to 25 years in prison. He is the father of Kelly Khumalo's first born child, Christian, and his life, just like other Kelly's former boyfriends, turned into a mess when he decided to fall in love with the Asinne hit maker.

Another Kelly Khumalo's ex boyfriend, businessman and music promoter Prosper Mkwaiwa, died in February 2015. Prosper was on his way to seek medical treatment after complaining of having a fever when he passed away. Prosper Mkwaiwa, who was originally from Zimbabwe, was first introduced to the masses when he married actress Tina Jaxa in 2000 in an extravagant wedding. The couple soon became tabloid fodder with their many fights and their habit of airing their dirty laundry in public.

They went their separate ways after two children, child support drama and a protracted divorce. Mkwaiwa then "poached" singer Kelly "The Virgin" Khumalo from her management and became her new manager, business partner in ProKelly Entertainment and later fiancé. That relationship also bit the dust in a public and messy way.

There are also reports that Prosper life started courting mysterious misfortunes after he allegedly broke Kelly Khumalo's virginity in 2007. Back then, Prosper, who was meant to get married to Kelly, told the media that he had had sex with Kelly.

"Yes, we have done it," said a bold and proud Prosper, but he would not be drawn into the details of when or where.