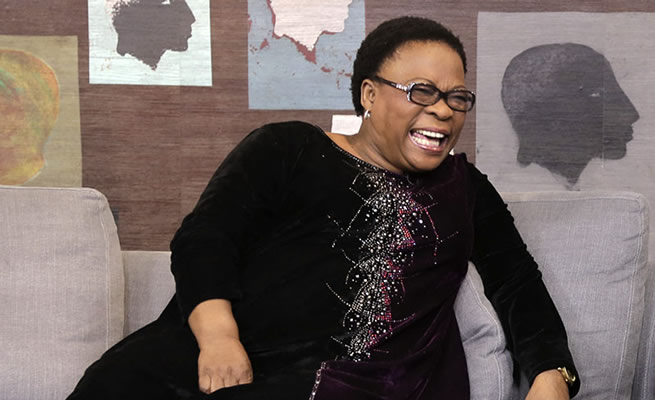 Veteran actress, Lillian Dube, aged 73,  has been in the industry for many years and has played her part in educating her fans and audience with the characters that she plays. In promotion of her recent stint on 'Looking For Love' Mam'Lillian has sparked conversation around cancer and social media have gone wild.

On Wednesday evening Dube appeared on SABC 1’s Sports at 10 with, Thomas Mlambo and spoke about the importance of sucking a woman's breasts.

"I encourage men to suck those titties and I encourage women…is it embarrassing? You don't suck a titty? What do you suck? You must suck something?" she said.


Mlambo had found the question to be humorous, however, Dube went on to reiterate the importance of the point that she was making…

Lillian Dube has recently been very vocal about her sex life, she caused a social media uproar when she revealed that she owned seven vibrators during an interview with City Press,

Although many might find the news to be laughable, Dube is adamant that the message that she is spreading is not a joke and that she is trying to spread an awareness. The actress managed to beat cancer twice, and while she had to go through chemo and other medical procedures like getting her breast cut off, she is spreading the message in a laughable manner as people are most likely to incline their ears to the information if they are entertained

”you have to do, self-breast examination, that is why I encourage men to suck those titties, I mean it, don't just go to the tils, start with the frills because a lot of men…[find out there is something wrong]…it’s not a joke” she said during her interview on real talk with Anele in late 2017

"Ladies, I encourage you to touch those balletjies, if a man says: 'eina'…testicular cancer…the things that I’m telling people to do, they are very fun, fun things to do" she added, advising women to also check their partners' health as well.

With there having been many tweeps unsettled by the veteran being vocal about what she does behind closed doors, and some questioning whether Dube had been using this as a tactic to rebrand herself, her loyal fans went on to stand behind her campaign, saying that she had been doing this ever since she had beat her battle with cancer.

Read the tweets below:

It's not re-branding. It's breast cancer awareness. She's been doing it for a while and is a survivor herself. The reason she phrases it this way is to encourage men to assist their women to check for lumps or any irregularities in breast tissue. She's doing a darn good job also.

She uses the same playful method when raising awareness about #ProstateCancer, urging men and women to play with their partners' "jewels". pic.twitter.com/2U6PK8w3xM