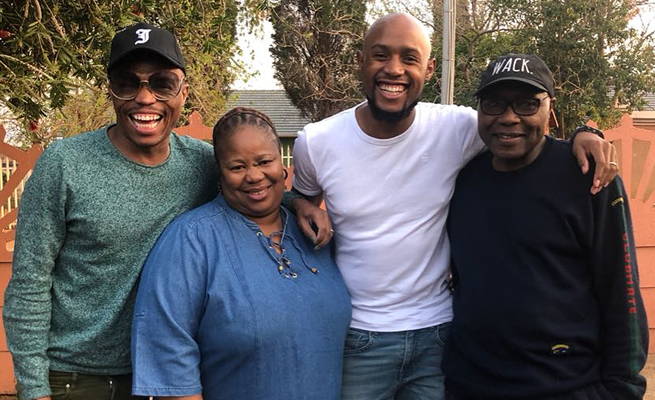 Mohale Motaung, who is soon to wed Somizi Mhlongo, finally introduced his fiancé to his family.

Celebgossip.co.za believes this has been Mohale's own way of saying sorry to his 'Sugar daddy' who is almost double his age. In June, Somizi and his fiancé, Mohale’s, engagement was rocked by cheating rumours which emerged in the Sunday Sun – more on that in a moment.

Last month it was reported that Mohale was allegedly cheating on Somizi with a young man by the name of Vuyo Pan, who is a university student from Johannesburg

The saga started with a private message on social media, says Vuyo Pan, the young man accused of having an affair with Mohale (24).

“Mohale approached me on Instagram to work for him making phone calls to 100 schools in South Africa asking to present matric dance packages to the students,” Vuyo tells DRUM.

Apparently, as soon as he found out about the affair, Somizi issued a strong “stay away” to Vuyo in the form of numerous threatening messages.

Mohale and Somizi got engaged earlier this year while vacationing in Paris. Somizi proposed to his partner on the Love Lock Bridge, with the Eiffel Tower in the background.

Although the couple went through a rough patch – including rumours of cheating and reports that the couple were selling their wedding to Mzansi Magic – the couple managed to pull through with Mohale finally taking his lover to meet the family.

And of course Somizi took to Instagram to share pics of the occasion with fans, captioning the snaps, “My in laws. It was worth it to get here. Thanks to the Motaung family for such a warm welcome and love. Now let the wedding planning begins. I’m so happy. This is priceless.”

Somizi always said he didn't want to have a long engagement and he further sealed with deal with his bae, Mohale, after meeting his bae's family.

"My in laws. It was worth it to get here. Thanks to the Motaung family for such a warm welcome and love. Now let the wedding planning begin. I'm so happy. This is priceless."

My in laws. It was worth it to get here. Thanks to the Motaung family for such a warm welcome and love. Now let the wedding planning begin. I’m so happy. This is priceless.

SomGaga posted several pictures of himself with his new squad and there were smiles all round.

Mohake shared in the joy, calling the meeting the "happiest day of my life."

Mohale shared the same pictures with the caption: "This has got to be the happiest day of my life. Bae finally got to meet the folks and the fam. I’m beyond happy!"

Meanwhile, wedding bells are said to be ringing in 100 days time as Celebgossip.co.za has gathered that the couple is already planning for the big day which is reportedly slotted in December this year.

Previously, there have been rumours that DSTV's Mzansi Magic has already sealed a deal with Somizi to buy broadcasting rights to his wedding. Although Multichoice disputed this claim, sources however, still maintain that Somizi and the pay tv company sealed a deal a few months back.