Home Celeb Gossip Sex-loving women remove their panties and throw them at Ringo Madlingozi after... 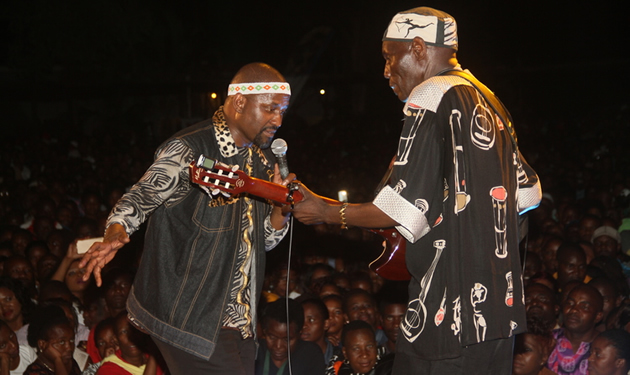 You might find it hard to believe it, but sex-loving women take off their panties and throw them on stage when Ringo Madlingozi performs – he has that kind of effect on people.

The sensual and sultry sound of his voice makes it difficult for women to not see him as just an artist who simply finds the utmost pleasure in performing for them. In an exclusive interview with move!, he talks about how love from women has landed him in trouble in his marriage, fatherhood and love for the economic freedom fighters (EFF).

Ringo got married in 2004 and as an artist adored across the country, especially by women, the married couple agreed to somewhat separate their private and public lives. “That is why to date, she is not known. We agreed to keep it that way,” he says, referring to his wife.

Two years ago, while performing at the famous Durban party spot, Eyadini, women threw panties at him as he performed. “When I left the stage, there were panties all over. I just don’t understand it,” he says with a laugh.

Ringo has unfortunately been separated with his wife for over 10 years now. Without going into too many details, he tells Move! that he found it hard separating “Ringo The Artist” from “Ringo The Husband” and that was a big problem during his marriage.

“I think at the time, I was not mature enough to be the husband I needed to be,” he says.

Although separated, he says they are still on good terms and they keep in contact. From this interview, you can tell that the Sondela hit-maker does not let misfortune ruin his outlook on life. “When I am affected by something, I let it affect me at that time so I can move on,” Ringo explains.

He says how he deals with life could be the reason why he ages so well. The singer, who looks younger than his age, says, “I've met people who are younger than me and dispute that I am actually 54.”

Ringo, who is a father of six children, says he is grateful that his life unfolded the way it has. Who would have thought that the romancer was once in a gang. “I was 21 at the time and I was desperate to belong. My cousin was a leader of a gang called Night Riders. Those times were really dangerous,” he says.

One day while fighting with a different gang in Gugulethu, Cape Town, his cousin was shot right in front of him. “I was next to him when he fell to the ground and I saw blood gushing out. He died on the spot. I was next to him, so it could have been me,” says Ringo.

From that day on, he made music his first love and never looked back.

Lately, we have been spotting Ringo in a red beret. His social, economic and political views are sharp and loud as ever. He has been seen very close to the leadership of the EFF, this leaving many people wondering if him not releasing new music is because of his new love for political office.

Interestingly, he has always been into politics by always questioning why there were blurred racial lines. “From when I was a child in Gugulethu, I would realise that when travelling to Cape Town where whites and coloureds were, we were treated differently. As a child, I would even wish to be coloured or white because of the superiority complex that existed,” Ringo says.

He says he later learned to love and accept himself, especially when he experienced an obvious distaste and arrogance from other races that made it clear to him that black people were not seen as equals.

When he was a student, he became heavily involved in politics. He got into trouble with the police for being at the forefront of protests against the Apartheid regime.

It is not always that you see an artist or celebrity being openly and proudly affiliated to an opposition party but for Ringo, his blood is red and he is not afraid to show it. “I cannot hide myself and who I am. This is a political party I feel comfortable with. They have no fear and that is what I love about them. When I am among the fighters, I lack fear and I feel a deep sense of belonging as a black person,” he says.

When Move! asked Ringo if he would consider taking political office, he chuckled. “No, no, no! I‘m an artist. I even tell my fellow fighters who look at me as a leader that I am just a member led by the rightful leaders of the party. I just have too much music to share to be a political leader,” Ringo adds.