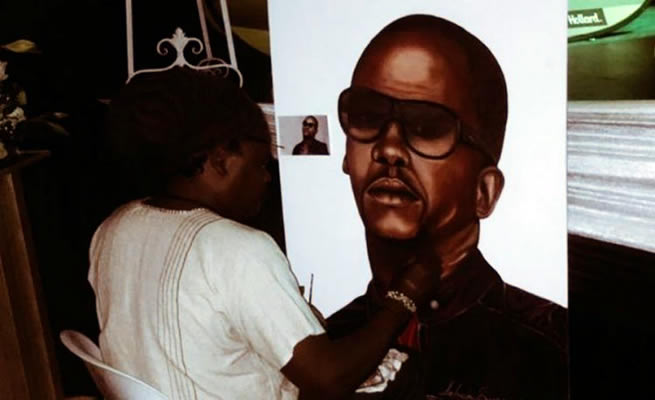 Celebrity funeral artist Lebani Sirenje aka Rasta came under fire yet again on social media, this time it was for his portrait of ProKid.

The artist has found himself hogging headlines over the past few months after Twitter ripped his paintings of high-profile personalities to shreds.

Rasta has become known for paying tribute to celebrities by painting gigantic portraits of them, which he hands over to the grieving family.

As hundreds of mourners gathered at Bassline in Johannesburg to honour ProKid with a memorial service, Rasta was also there with his paint and canvas.

Moments after unfinished images of Rasta’s portrait of ProKid emerged on Twitter, fans slammed him for it.

Twitter believes the portrait does not resemble ProKid and flooded the social media platform with angry comments.

This guy though 🙈 for every funeral pho & with so much practice you woUlf think he has mastered the paint brush by now, someone.. anyone, pls take away the pain brushes #ProKidMemorial pic.twitter.com/HVdanEfjC3

This Rasta must yehlisa on the trees before painting 😂 #ProKidMemorial

I get Rasta’s interpretation, He is a painter not a photographer #ProKidMemorial

This is not the first time that Rasta has received backlash for his paintings.

In May Rasta was also roasted for his painting of TV personality Akhumzi Jezile as fans believed it was not a true reflection of his “larger than life” personality.

Before that the artist was hauled over the coals for a portrait of Ma Winnie Mandela.