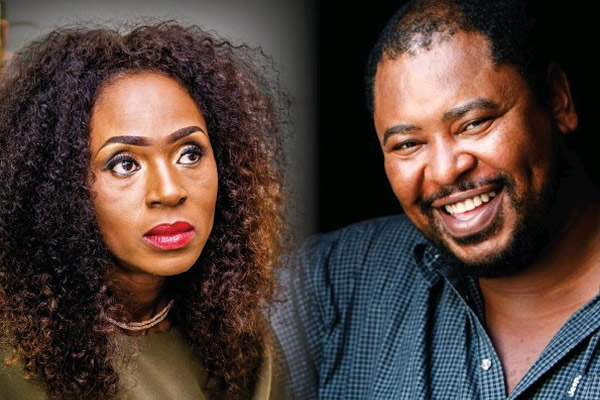 SHOKI Sebotsane-Mmola, who is popularly known for her role as Celia Kunutu on SABC1 drama series, Skeem Saam, has unashamedly decided to share the details of her physically and emotionally abusive marriage that she says could have sent her straight to the grave.

After over a year after opening up about the pain and sadness she suffered in her marriage, Shoki and her actor husband, Sello Sebotsane, recently appeared in the Johannesburg Magistrates Court where Sello faced charges of domestic violence and assault with the intent to do grievous bodily harm.

It is not a lot of women, especially celebrities, who find strength in making their private affairs public knowledge but Shoki has decided to expose what really went on in her marriage because she says she is not just doing it for herself, but for all the other women who are either silenced or living in fear of the men who claim to love them.

The killing of women by their boyfriends and husbands has made headlines for months now. Shoki, who stayed in her marriage for 10 years, before she decided to leave says, “Women have reasons why they stay, why they bury it and why they are not saying anything. I can only say that every blow on your face, that knife on your skin and that blood dripping down your body is not what marriage is about. Marriage is about a union of two people that love each other, care for each other and are supposed to protect one another. Marriage is not a relationship where one is going to play God and take the life of another. If your life is on the line, look at your children and ask yourself, ‘is my death worth this marriage, is my death the kind of memory I want to leave my children with and do I want to live to see my grandchildren?’"

HER DAUGHTERS WITNESSING THE ABUSE

Shoki says her daughters, Oratile (10) and Karabo (8), witnessed incidents where their mother was punched and beaten up by their father, something Shoki says hurts her deeply.

“My children have to live with this memory; they were there. They are just children. They don’t have to be subjected to a situation where they have to see their mother almost losing her life. That hurts,” she says.

This whole process has been quite challenging for her. In an interview with Move! last year, Shoki was not ready to talk about the details of the abuse but now she says she has had lengthy conversations with her daughters about everything.

Shoki adds that abusers should realise the long-lasting effects abuse has on children. “Every step I take, I let them know and that has empowered them to explain the situation to other children at school because they do ask them. I tell them that they should never carry any shame; they were put in that situation. If anyone should be carrying the shame, it is Sello Sebotsane,” she explains.

Many women in abusive marriages and relationships do not always get a chance to have their day in court. For Shoki, this is a privilege that makes her feel liberated. “I am relieved that finally, I will have my day in court and because my side of the story will be heard from me. For me, it feels like I am finally taking a step to show my children that no kind of abuse is excusable. They should never accept it from anyone and they don’t get to learn that from anyone else but me. I feel like I am moving into a direction that will not only offer a change just for me, but a whole lot of other women out there who did not get the chance to make it to the court room: women who didn’t get to tell their truth their own way,” the actress explains.

Although she is still in the process of divorce, Shoki says she is going right ahead with the case regardless. “For every crime, there is a sentence and I expect that Sello gets a sentence that fits the crime. An apology would mean what he has done is an excusable crime. If he needs to apologise, then he needs to apologise to his family for wrecking the family tree that was being built. He should apologise to his children. I will not wait for an apology. I want him to get the punishment he deserves. He also needs to apologise to my parents and my family. He ripped me apart with every punch that landed on my face. My mother gave birth to a daughter, he didn’t give birth to a punching bag.”

Her second court appearance is on 22 August where one of her daughters is expected to testify in the case. When asked for comment, Sello says, “I have two children with my wife. I am thinking of their well-being so I do not want to comment on the issue. Let the law take its course.”