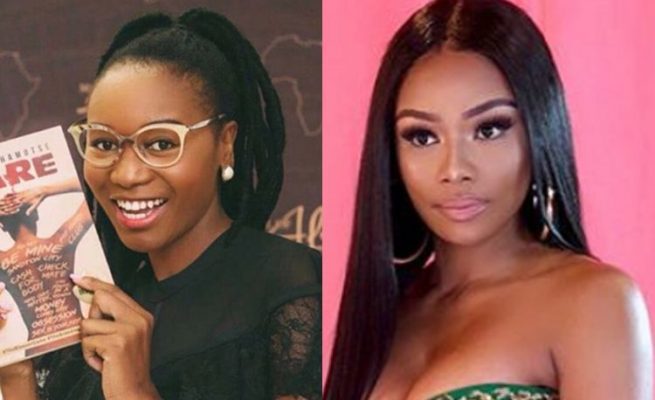 The author took to Twitter this week to share one of Bonang’s famous quotes, but got an aggressive reply from Queen B.

“… they have to talk about you. Because when they talk about themselves, nobody listens. Bonang Matheba,” Jackie wrote in a since deleted tweet.

Jackie shared the Bonang quote after facing online backlash for allegedly trying to pass fiction off as non-fiction in one of her books.

Twitter user Lupi Ngcayisa accused Jackie of claiming that she is a fiction writer in an attempt to defend herself against charges filed against her by Basetsana and Rome Kumalo.

Bassie took Jackie to court after she claimed in a tweet that a media mogul’s husband made a gay sex tape.

While she didn’t name Basetsana in the post, many assumed she was talking about the businesswoman.

The couple were granted a protection order against Jackie last week

“It would be responsible of @ExclusiveBooks to recall @JackiePhamotse’s book BARE. She misled society by passing on fiction as real. The court affidavit she submitted bears reference. Those who bought the books must be refunded,” Lupi wrote after sharing court papers from the case.

It would be responsible of @ExclusiveBooks to recall @JackiePhamotse’s book BARE. She misled society by passing on fiction as real. The court affidavit she submitted bears reference. Those who bought the books must be refunded

So where does Bonang fit into all this?

Unbeknownst to Jackie, Basetsana is not only Queen B’s mentor but they are also close friends

So naturally, when Queen B spotted Jackie using her name in a tweet, she responded with anger!

Basetsana and Bonang are not the only people upset with Jackie.

Linda Moeketsi accused her of defaming him in her book Bare, and hinted he might be taking legal action

“I must consult my lawyer on what happens when a person defames you using fiction,” he tweeted.

I must consult my lawyer on what happens when a person defames you using fiction. https://t.co/p0m4ahXtzX

Linda added in another tweet that he has an army of lawyers waiting.

Fear not @lupingcayisa, I have an army of lawyers waiting for any document that you’ve been thereatened with. Perhaps, while they’re around, we can also ask them why their client attached my name to an imaginary “hockey club”. She must bring everything she has. I AM READY!