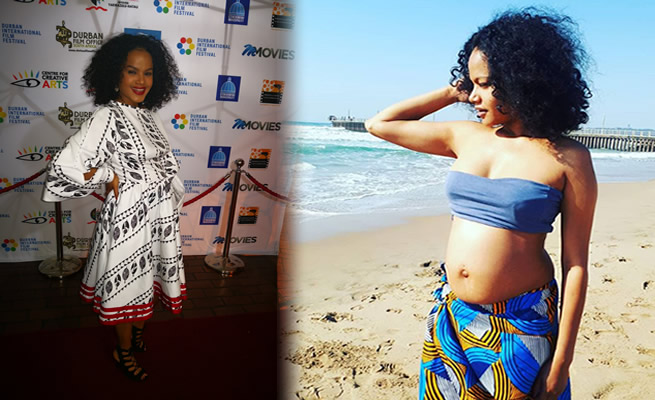 Petronella Tshuma, the star of the Durban International Film Festival's opening film, The Tokoloshe, debuted her baby bump at the opening ceremony in Durban, on Thursday.

Wearing a Xhosa umbhaco inspired garment by Urban Zulu, she looked glowing on the red carpet ahead of the premiere of her latest movie.

The Rhythm City actress took to social media this week to share the exciting news with her fans. Certainly these are the after effects of warming each other though playing a 'hide-my-sausage' game in winter.

"A mother's joy begins when new life is stirring inside…when a tiny heartbeat is heard for the very first time and a playful kick reminds her that she is never alone,” she said.

“Yes, I am soon going to be a mother of two,” the Rhythm City actress said on the red carpet.

Although she did let slip that the picture was taken by “daddy”, she hasn’t really opened up about who the father is.

But if celebville is anything to go by, we will eventually find out.

Just ask Jessica Nkosi how tiring it is trying to hide your baby daddy from the public.

Anyway, check out the baby bump below:

Camagu. "A mother's joy begins when new life is stirring inside…when a tiny heartbeat is heard for the very first time and a playful kick reminds her that she is never alone." 📸 @Daddy

A post shared by PETRONELLA NONTSIKELELO TSHUMA (@petronella_tshuma) on Jul 21, 2018 at 2:08am PDT

She’s in her prime as one of the leading young actresses in South Africa. However, The Tokoloshe is her first leading role and she was handpicked for it.
"I didn’t audition for the role," she revealed. "I was in England when I got the call from Jerome and the producers (Cati and Dumi) that they wanted me to play Busi. Their decision was informed by my past works.”

The Tokoloshe is Tshuma’s second film to be chosen to open the DIFF. The first was 2013’s Of Good Report which was controversially not allowed to be screened by the Film and Publications Board. Directed by Jerome Pikwane, the horror-thriller is the second genre film to open the festival, after last year’s Serpent by Amanda Evans.

In The Tokoloshe, Tshuma plays Busisiwe, a destitute woman who gets a job as a cleaner at a neglected hospital in Joburg. She not only has to deal with the dodgy hospital manager, but also discovers an abandoned girl who believes she’s tormented by a supernatural force. Busi must face demons from her past in order to save the child from the abusive monster that pursues them relentlessly.