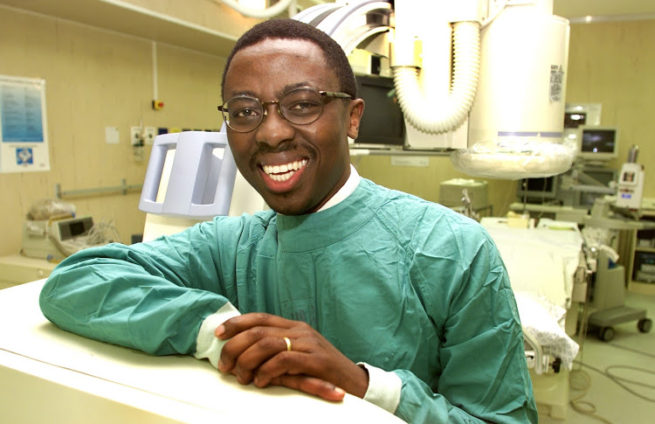 A statement about the death on Friday of the 51-year-old dean of health sciences at the University of Cape Town said: “It is with great sadness that we‚ the Mayosi family‚ announce the passing of our husband‚ son‚ father‚ brother and uncle‚ Bongani Mayosi.

“Bongani died on the morning of 27 July 2018. In the last two years he has battled with depression and on that day took the desperate decision to end his life."

The statement‚ whose authenticity was confirmed by family members advocate Ncumisa Mayosi‚ added: “We are still struggling to come to terms with this devastating loss. Kindly respect our wishes as the family that beyond this statement‚ we will not discuss or entertain any further questions on this matter.

“We ask that you understand our need for privacy during this difficult time. We welcome you to join us for daily prayers at the family home in Pinelands between 18:30 and 19:30.

“Bongani’s funeral will be held in Cape Town on 4 August 2018. We will communicate further details of the funeral in due course.”

President Cyril Ramaphosa joined the mourning for one of the country’s leading scientists on Saturday‚ saying: “On behalf of government and South Africans as a whole‚ we convey our most heartfelt condolences to his family‚ friends and relatives‚ and the health science fraternity. May his soul rest in peace.”

Mayosi made his name as one of the world’s top cardiology researchers when he discovered the genetic mutation that causes heart failure.

Since 2011‚ Mayosi had been advising Health Minister Aaron Motsoaledi on policy and strategy for health research. He had led the faculty of health sciences at UCT for two years.

Born in Mthatha‚ Mayosi was inspired by his father‚ also a doctor‚ to help others. He studied at what is now the Nelson Mandela School of Medicine at the University of KwaZulu-Natal‚ and it was there that he met his dermatologist wife‚ Nonhlanhla Khumalo. He leaves her and their two daughters.

The family asked for privacy during this "difficult time".

The family did extend an invitation for those who wished to join them at daily prayers at their home. The funeral would be held on August 4 in Cape Town. Further details would be released at a later stage.

Meanwhile, Parliament issued a statement on Saturday, honouring the legacy of Mayosi – who in 2009 received the country’s highest honour, the Order of Mapungubwe.

"Professor Mayosi's death has robbed South Africa of one of the finest brains and passionate health experts who still had so much more to offer the nation," said Parliamentary officials in the statement.

The country was indebted to him for his "immense contribution to the country's policy and strategy for health research".

Earlier, condolences were extended by President Cyril Ramaphosa on behalf of government and South Africans as a whole.

"May his soul rest in peace," he said.

Tragic News: Prof. Bongani Mayosi, Dean of UCT's Faculty of Health Sciences has passed away at the age of 51. Our condolences to his wife and children, and broader family and friends. May Bongani rest in peace and his contributions forever be remembered by a grateful nation. pic.twitter.com/TBIKcUi7bE

Prof. Bongani Mayosi inspired a generation of doctors. I still often listen to this for motivation. Lived a life of impact! We aspire to reach such heights. Thank you for your life Prof.

The world is a desperately sad place tonight with news of the passing of the great #bonganimayosi previous head of Dept of Medicine @UCTHealthSci & recently Dean. I feel blessed to have worked under Bongani & benefitted from his leadership, kindness & humanity ?? pic.twitter.com/WRRyc3RaJz

It is not just UCT that has lost a medical giant, but the rest of the world mourns your loss. Your contribution and inspiration, like a ripple, continues even in your death.

Professor Bongani M Mayosi. An amazing leader, a brilliant mind. Deeply saddened and shocked by the news. A HUGE loss to humanity and RHD research. It was a great privilege to be supervised by you. Heartfelt condolences to the Mayosi family. Gone too soon. RIP #bonganimayosi ?? pic.twitter.com/Q4tEip7Z30