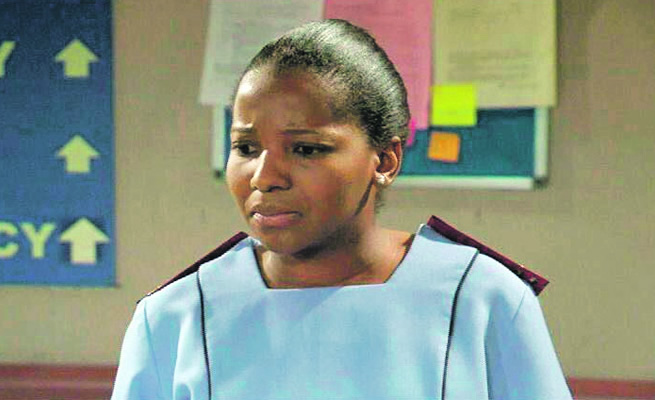 IN the popular soapie Skeem Saam, her character owed money to a mashonisa.

Now in real life, two men are accusing actress Dipuo Kgaphola, who plays Sister Mokarati in the soapie, of owing them money.

Grasscutters Japi Nkwana (29) and Thabiso Shumba (26) told the People’s Paper they were furious.

The two said they were happy and proud when the famous woman from their kasi, Refilwe outside Cullinan, offered them work.

“We used to brag that we knew a celebrity and where she lived. She used to take us to the site near Midrand every day in her car and we were famous in Refilwe for working for an actress,” Japi said.

“When she was on Skeem Saam, we made sure we didn’t miss the show.”

Thabiso said Dipuo promised to pay them at the end of June but hasn’t done so.

“We went to her home to find out why we weren’t paid. She didn’t come out. Her father told us she would pay us after three days and we left,” he claimed.

He claimed three days passed and they still didn’t get their money.

“We phoned her and she dropped the call and switched off her phone. That’s when we knew she wasn’t prepared to pay us.”

“We have kids and families. People don’t believe us when we say she didn’t pay us. They say she’s an actress and has money.”

“I told them I haven’t been paid and even showed them my communication with the contractor. As soon as I get paid, I will pay them,” said the actress

She said she was surprised the two chose to go public about their non-payment.

“I’m an honest person. They know where I stay and I’m not hiding,” said Dipuo.