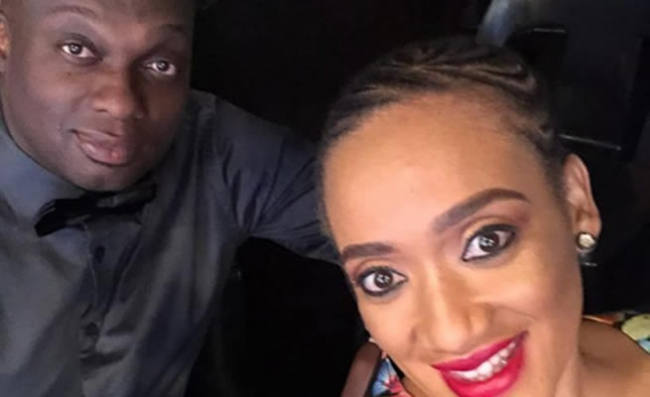 RADIO host, Thabo ‘Tbose’ Mokwele, broke the internet when he posted a nude picture of his wife, Mapaseka, with a sexual caption much to the outrage of social media users.

The premature debate was sparked by arguments that it was not his wife in the picture but his side chick. But these claims were instantly dismissed by the married couple.

WIFE CONFIRMS IT IS HER

Tbose wrote on Instagram: “How’s your wetnesday (sic) going, here’s mine.” Mapaseka always dresses elegantly and covers up so the picture brought on a lot of speculation as to how the Kaya FM’s Home with Mapaseka host could pose for such a revealing picture. She can be seen lying on a bed with her thighs, breasts and buttocks exposed.

In a parody satire Twitter account, Advocate Barry Roux who is known as an exclusive source of secrets, added fuel to the fire when he wrote: “Thabo Mokwele’s side chick posted her nudes on his Instagram. In the other news: Thabo Mokwele’s side chick took his phone while he was asleep, posted her nudes on his Instagram & tagged Mapaseka wa Batho. #Tboseza deleted it as soon as he saw it.” Many other posts similar to this one followed but Mapaseka poured water on the story when she replied to one of the tweets that it was her in the picture. “No, you twit, that’s a pic of me, his wife,” she said.

WHY HE DID IT

Tbose has always thought his wife is sexy and eye-candy, from the time they met in Sandton in the 1990s. In an interview on Real Talk on SABC3 last year, Mapaseka and Tbose sat on the couch with former host, Anele Mdoda. He revealed what first attracted him to her when she was walking by with businesswoman Basetsana Kumalo.

“The first thing that caught my eye was her legs. I was like who is that?” he says.

The nude picture was not addressed by the couple after the social media story, since it happened in January. Months on, Tbose, who was recently on SABC3’s late night show, Trending SA, said that he thought his wife had a gorgeous body and that he thought the picture should not go to waste as he marvelled at how sexy she was.

“For starters, this beautiful wife of mine gave me three gorgeous kids and raised my other two kids. So she is a hot woman, and now, one of the evenings, she’s sleeping, and I’m like ‘look at this sexy thing here’. So I take the picture,” he said on the show.

Tbose and Mapaseka were divorced. After years of being apart, they remarried. However, they say they should not be seen as perfect or an example of what marriage should be because they too have things to work through on a daily basis.

Last year, they started the YU4ME seminars for couples where they invite other couples to talk all things intimacy, communication and romance.