Home Celeb Gossip Somizi loves tlof tlof, he ordered us to have 3some with Orlando... 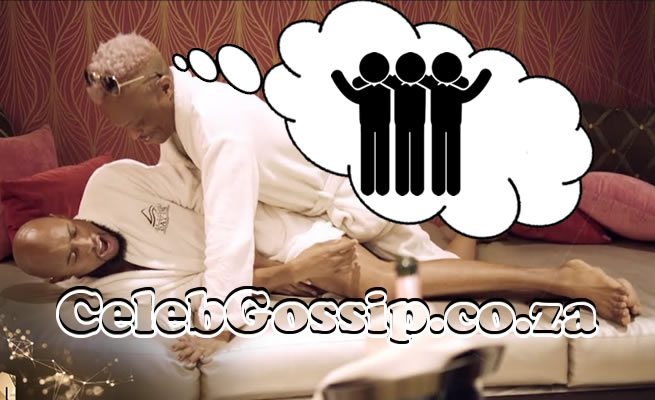 South African actor and radio personality Mohale Motaung has been dropping bombshells on his special – Mohale: On The Record – which was released on Showmax on 4 August.

While a lot has been said about the former couple over the years – Mohale gives his account of what went down in a sit-down interview with news anchor and radio host Aldrin Sampear.

Sampear asked if this was the day after the pair got engaged and Mohale agreed. He then asked the actor if this was a red flag.

“It wasn’t a red flag to me then because he said there was nothing happening. I overlooked everything,” he continued.

South Africans were first introduced to Mohale when he became the love interest of Somizi. Later, the two became Mzansi’s poster couple with their first-of-its-kind same sex wedding special “Somizi & Mohale: The Union”, which earned them a South African Film and Television Awards nomination.

But it wasn’t long before the cracks in their relationship started to appear and now Mohale fills in the blanks in the explosive tell-all special and after being the main topic on “Living The Dream With Somizi” season five.

The special sees Mohale take control of the narrative by having his family share details about his upbringing and who he really is and was, before being attached to the “Sarafina” star.

He doesn't hold back during the tell-all as he unpacks the highs and lows of his public relationship. While he was a hot topic on “Living The Dream with Somizi” season five, Mohale told Sampear that he didn’t watch the reality show that he was once a part of.

In fact, Mohale was shocked that his name was mentioned in the show as legal documents bound the two from speaking about each other on such platforms.

Mohale refutes that he was a “fan”' in Somizi’s life, as he was made out to be by Somizi’s daughter Bahumi Mhlongo during the reality show.

Musician Vusi Nova, who once made it clear that he wasn’t a “fan” of Mohale and only tolerated him because of Somizi, is someone that Mohale said he only met three years into his relationship with Somizi.

“I was particularly shocked because I didn’t spend much time with Vusi and I think Vusi came over to the house three times when I was there. So I wasn’t sure how he reached a conclusion to say he didn’t like me,” said Mohale on the tell-all.

Another friend who seemed to be in the former couple’s corner is Thami Dish, who Mohale now revealed is no longer friends with Somizi.

The Idols SA judge previously opened up about suggesting a versatile marriage with Mohale on an episode of his reality show. This was because he claimed their sex life wasn’t great,

“As you may know that my suggestion of not an open relationship, a versatile relationship where (for) the benefit of our marriage,” he said while on a call with his bestie Vusi Nova.

Somizi claimed had issues with tlof tlof and he was just trying to make it work.

“I was dealing with someone who had issues with tlof tlof or I don’t know what you call it. I try to find ways of making it work. The tlof tlof life was dead. I still stayed but I said to him let’s find other ways. Either we could go for tlof tlof therapy – he did not want to go because he was in denial of the fact that our tlof tlof life wasn’t great,” he continued.

Mohale explained that there was a “thin line” between being “controlling and firm” in the relationship.

But not all was bad between the former couple as Mohale said he felt safe with Somizi and loved the fact that Somizi would make time for him despite his busy schedule.

When it comes to the abuse allegations that were revealed in a leaked audio, Mohale refers to that period as a dark time in his life.

He speaks of an incident that took place following a work trip which turned violent.

“He came upstairs, I remember he had a bottle of champagne in his hand. I was trying to get out of the clothes that I was wearing and he started spilling on me and with my trying to find out what was going on, he started beating me up. His main aim in everything, I remember him saying that he needs to mess up my face because this beautiful face is messing things up for him. I remember having to cover up my face as the shoes he was wearing were really going to damage my face.

“He started hitting me in the ribs… I crawled down the stairs,” said Mohale.

Discussing one of Somizi’s most popular friendships with TT Mbha, who he has since had a falling out with, Mohale said it was because the two “cooked up a plan” for Mohale to not get a job with the production company, Ferguson Films.

“A big reason why Somizi and TT Mbha are not talking is because I lost out on work because Somizi asked TT to speak to certain people and told them not to hire me,” said Mohale.

He confirmed that Somizi had sent him to Ferguson Films with a fake story to mess up his chances of him getting the job.

When it comes to that explosive leaked audio Mohale acknowledges that he was aware of the conversation being recorded.

He participated in the conversation because he was speaking to the then executive producer of “Living The Dream with Somizi“, who he regarded as a “brother” at the time.

The former executive producer wanted to find out why he wasn’t participating in season five and wanted to report back to the channel with his research.

Mohale admitted that he was happy with Somizi until “certain things started to happen”. He said he was controlled and constantly reminded that he brought nothing to the table except his “pretty face”.

Mohale denies wanting half of Somizi’s assets and alleges that Somizi is the one who suggested the joint split. Mohale said he just wanted his clothes, his vehicle that was damaged and his share of their wedding special payout.

“Mohale: On The Record” is currently streaming on Showmax.