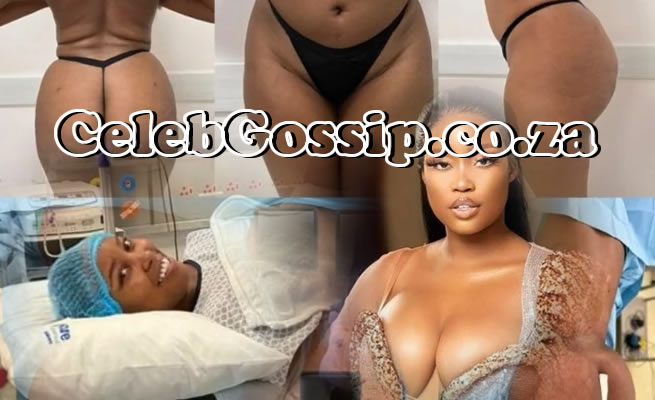 More South African celebrities are opening up about going under the knife to perfect what they already have.

Stars such as Khanyi Mbau, Tessa Twala, Inno Morolong, and the late Mshoza have been vocal about getting a little bit of cosmetic surgery help.

Reality show star and club hostess, Eva Modika (26) is no stranger to the surgeon’s table. She in fact is currently on her recovery bed, hours after getting surgery which lasted eight hours.


The Diamond and Dolls reality show star flew to Turkey from South Africa to get a Brazilian Butt Lift – which is a cosmetic procedure that involves transferring fat from one part of the body to help create more fullness in your backside, as well as a 360 liposuction procedure on her stomach for a “snatched waist”.

Both procedures were worth R65 000 at The Clinique Istanbul.

With the return of their reality show Diamond and Dolls for season two, the Pretty Much beauty cosmetics owner says she needs to look “ravishing for season two”.

“Season one was shot five years ago. I have since had a 360 liposuction in 2020 during the lockdown and this is my second procedure,” Eva tells Drum.

“The surgery was difficult. It took eight hours because the surgeon had to fix mistakes made by my first doctor in South Africa,” she says.

She was unhappy with the first procedure and wanted to fix it.

“I had a lump on my first procedure next to my umbilical cord which sometimes caused discomfort. All surgery is painful, but I just discovered the first surgery gave me fibrosis, lumps and that’s actually very sad because I only realised now in Turkey with this second surgery. But he has removed the lump,” she says.

Also being a social media influencer, she says she hid the lump in all her pictures.

“I am good with editing pictures, and I would often edit so the lump would not be visible in pictures. It’s so unfair because I paid so much money on my first procedure, I was tired of photoshop work,” she adds.

But she is happy with the new results and can’t wait to heal so she can jump into lingerie and a swimsuit. She is already loving her new body because of the meticulous aftercare.

“The treatment has been amazing; the nurses are sweet and doing everything it takes to make sure I heal fast. I’ll be back in SA in approximately a month, I did the liposuction and BBL because I was not happy with the first results, also I want to simply look like a proper doll,” she says

In 2020, Eva revealed to Drum that she had gone under the knife to “perfect what was already beautiful” and got liposuction for the first time.

“I did what is called a 360 liposuction, which is done on the front and back of the body,” she said.

“The entire procedure costs R65 000 and I removed 1.5 litres of fat from my stomach area.”

She said, although she is confident, she wanted to work on her imperfections and sculpt them into her “dream body.”

“I am a greatly confident person. Of course, we all have insecurities or parts of our bodies that need minor adjustment and that is what I did. A tweak here and there and here I am. I didn’t do it because I felt fat; I wanted my body to be sculpted to the closest thing to perfection,” Eva says.

SA celebrities who have gone under the knife:

Actress and media darling Khanyi Mbau revealed that she had spent R95,000 on her cosmetic surgery.

Controversial reality show star Inno Morolong went on the City Girls podcast to reveal her liposuction journey and how she had always been body shamed for being a fuller figured woman.

Model Rosette Ncwana opened up about struggling to lose weight after giving birth and liposuction helped.