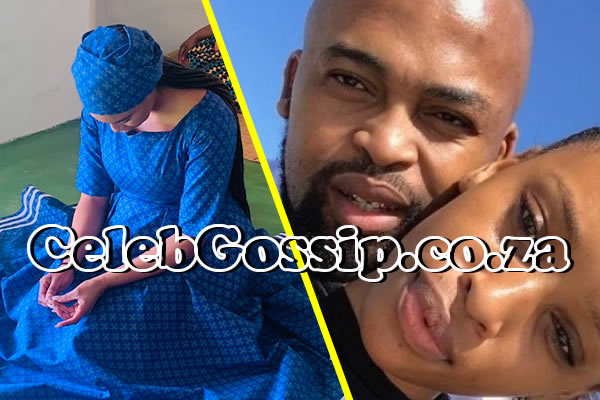 The former Imbewu: The Seed actress posted a series of photos on both her Instagram and Twitter accounts that she is officially off the market.

According to her post, her lobola negotiations took place on Sunday, 23 July.


Nonsindiso has children and was not married although she was already lived with her baby daddy.

This week the actress shared on her Instagram that she has finally gotten hitched and flooded the internet with a series of photos.

The lobola ceremony took place last weekend and in the pictures shared, she was wearing her traditional attire as a new daughter-in-law. Many publications said the actress was already married, but no one knew what her husband was. This is the case as Nonsie did not share the name of her husband or his face in her pictures.

The two have two children already, the older one being a boy and the younger one is a girl, who Nonsie posts frequently on her Instagram.

As she waits for Umkhokha to return for its second season, the actress, on a small hiatus, has had many of her co-stars in the two drama serials wish her the best in her new marriage. She even joins the list of many celebrities that have tied the knot this year, like Faith Nketsi, K Naomi, Sivenathi Mabuya, Tee Xaba and many more.

Nonsindiso is best known for playing Zethu on Imbewu, where the character had a tragic ending. Her exit was an educational scene on mental health awareness and suicide late last year.

Fans and celebs congratulated her for the huge step she has taken.

@Nombunombz commented: “Oh this is so beautiful, I saw these pics earlier. Congratulations.”

Gcaba started her career in theatres and has made a name for herself over the years.

She later joined Imbewu as Ntombizethu. Ntombizethu had a baby boy with Nkululeko Bhengu but they broke up because Fikile came into the picture.

Zethu ended up committing suicide after finding out that she could never get back together with Nkululeko.

The actress is also part of Umkhokha, which is set to return for a second season.

HER CHARACTER IN ‘IMBEWU: THE SEED’

The seasoned actress began her acting career in theatre according to Daily Sun and became popular throughout the years.

The publication also reveals that she’s scored a role in Mzansi Magic’s Umkhokha season two which will premiere soon.

Gcaba exited the e.tv telenovela in July 2021 after her character Zethu who was suffering from depression and committed suicide.

The on-screen portrayal of Zethu helped fans have discussions about mental health issues without fear of judgment in the public.

Her baby daddy Nkululeko (then played by Nkanyiso Mchunu) pushed her to the edge and turned her into the suicidal, sad and depressed person she became in the end. Zethu was a sweet, carefree, and loving woman before she met Nkululeko and felt betrayed when he abandoned her when she was pregnant and never recovered from that.

Nkululeko’s second girlfriend (Fikile) after Zethu also committed suicide in the end when she found out that she was his half-sister.

Fikile (Phindile Gwala) like Zethu battled to live without him and drowned in the sea.

Nkululeko (now played by Kay Sibiya) also had an affair with his brother’s wife Nokuzola (Vuyiseka Cawe) who also attempted to commit suicide when the Bengus found out that she gave birth to Nkululeko’s child.

Not Imbewu making me cry this hard. Guys it's sad losing the person you love, unfortunately you can't force them to love you as much as you love them#ImbewuTheSeed pic.twitter.com/j5oAMyXIID