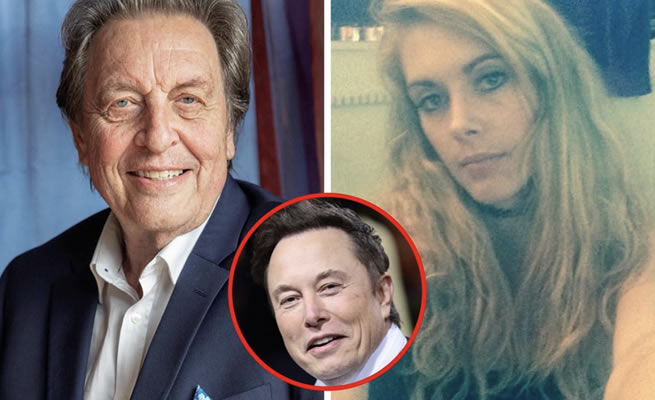 It appears to be a case of “like father like son” for the Musks, as reports emerge that Elon Musk's father has sired another child — with his stepdaughter no less.

ELON Musk's father has claimed he's had a second unplanned child with his 35-year-old stepdaughter in a bombshell interview.

Errol Musk, 76, told The Sun he welcomed a daughter with 35-year-old Jana Bezuidenhout three years ago.


It emerged in 2018 that Errol had baby Elliot Rush, nicknamed Rushi and now five, with Jana, who is 41 years his junior and he had raised since she was four.

Tech CEO Elon was reported to have gone "berserk" when he found out his South African engineer dad was having a child with Jana, who lived with him while growing up.

Errol was married to Jana's mother Heide for 18 years and had two children together.

Now Errol has told The Sun his purported second child with Jana was "unplanned" but that he was living with her after the birth of their son.

The tech CEO's dad said: "I haven't checked her DNA. But she looks just like my other daughters. She looks like Rose and Tosca mixed up.

He added: "She wasn't planned. But I mean, we were living together. She [Jana] stayed here for about 18 months after Rushi was born.

"But I realised she's two generations behind whereas her mother was one generation behind when I married her.

"So any man who marries a woman, even if you feel very sprightly, it's going to be nice for a while. But there’s a big gap… And that gap is going to show itself.

"I married her mother when she was 25 and I was 45. She was probably one of the best looking woman I've ever seen in my life."

Errol said he no longer lives with Jana but confirmed they "have a lot of affection for each other".

He added: "But the thing is it's not practical. She's 35 next birthday. So she's getting on. So eventually if I'm still around she might wind up back with me. It's difficult.

"I mean, I would much rather have them here. But Jana came and spent a few days here about six months ago. And the kids were starting to get on my nerves.

"Then I miss them as soon as they have gone."

As for having more children, Errol said: "The only thing we are on Earth for is to reproduce.

"If I could have another child I would. I can’t see any reason not to.

"If I had thought about it then Elon or Kimbal wouldn’t exist."

But Errol does admit his other daughters were "shocked" by his relationship with Jana because "to them it was their sister".

He added: "And they still don’t like it. They still feel a bit creepy about it, because she's their sister. Their half-sister.”

And Errol said he is no stranger to women claiming to have had his child.

He claimed: "I have about six people, women who claim that their child is my child right now. Obviously they are opportunists.

"There was a period in Johannesburg in the eighties that I was going out with different woman every night. I had plenty of dates.

"So it's quite conceivable that that one of them could actually come back and say, this is your child. It's possible.

"But I haven't had anything genuine presented to me. But I’ve got a lot of people claiming."

This is the South African engineer's seventh child. He shares Elon, Kimbal (the entrepreneur targeting the US's reliance on fast food) and daughter Tosca, a film producer and director, with first wife and high school sweetheart Maye Musk.

Errol's elder children were reportedly furious to learn of his relationship with Jana, with the 76-year-old confirming that his other daughters still found it “creepy” and are still not comfortable with it.

His relationship with Elon meanwhile, remains estranged, according to the site, with the SpaceX boss previously branding his father a “terrible human being”.

Despite this, the two seem to share a common goal to “help the underpopulation crisis”, as Elon quipped on Twitter after the news of his twins' birth.

Reports emerged earlier this month that the SA-born billionaire secretly welcomed twins with a top executive at one of his companies back in November. He also has eight other children from previous liaisons.

His daughter, Vivian Jenna Wilson, was recently granted her request to legally change her name and gender recognition.

The 18-year-old filed a request to change her name in accordance with her new gender identity and because “I no longer live with or wish to be related to my biological father in any way, shape or form”.

Speaking to The Sun earlier this month, Errol appeared to hint at his son’s political ambitions.

He also joked about his son's number of kids after the tech titan appeared to confirm he had twins with one of his top executives.

Errol said that he finds it hard to "keep track" of his grandchildren.

It emerged on July 6 2022 that Musk had welcomed two more kids with Neuralink executive Shivon Zilis.

Shivon, 36, is the third woman the entrepreneur has had kids with.

And Errol claimed that his son had been called a highly offensive slur by teachers when he was seven.

Musk's father has been revealing details about his relationship with Elon and the tycoon's mom, Maye, 74.

He denies claims that he has had a bad relationship with his son for years.

In a 2017 interview with Rolling Stone, Elon described his dad as a "terrible human being" and claimed his childhood was "painful and isolated."

One reason for the bitter rift was thought to be that Errol fathered love child Rushi with Jana, which he described as a "one-off mistake."

Meanwhile, Elon's strained relationship with one of his children was thrust into the spotlight last month after the teen filed a petition to change her gender.

The legal document revealed that the former Xavier Alexander Musk, 18, wanted to change her gender identity from male to female and be known as Vivian Jenna Wilson.

She said she's changing her name because she "no longer lives with or wishes to be related to my biological father in any way, shape or form."