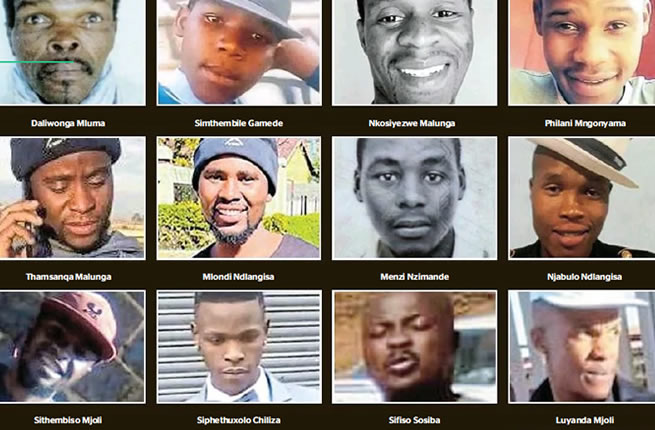 With bullets lodged in limbs and the back, survivor just glad to be alive, hopes to walk again and dreams of getting a driver’s licence…

*Thanduxol (not his real name), a Damelin travel and tourism student who survived the Soweto tavern shooting, lies in hospital with seven bullets, in excruciating pain and haunted by a senseless attack that may forever change his life.

Three bullets hit his arm, another three penetrated his leg and another hit him in the back. Thanduxolo, 20, and his friend Mandla, 23, were among the 23 patrons who were ambushed by unknown gunmen at Mdlalose’s Tavern in Orlando on Sunday morning. Mandla was shot three times, in the abdomen and thigh.


The two friends do not drink alcohol and had merely gone to the tavern to play pool and watch a game of soccer as their neighbourhood, Nomzamo, hasn’t had electricity for three weeks due to cable theft. The attack left 16 people dead and seven injured.

More than 130 AK-47 cartridges were found at the crime scene. Thanduxolo and Mandla are now recovering at Chris Hani Baragwanath Academic Hospital.

Thanduxolo’s arm is wrapped in a cast and he can barely walk as pins have been inserted in his leg.

“I have never been in so much pain in my life. I don’t know if I would be able to walk properly after this incident. I have been told that a lot of people were killed that night. I am grateful that I am still alive,” said Thanduxolo.

He was near the pool table waiting for his turn to play when he heard gunshots ringing over the loud music.

“The gunmen came through the sliding door and opened fire on everyone that was inside the tavern. I tried to run to the back but I fell down on the floor because of the chaos that was happening in that small space.

“I was shot on the back and more bullets hit me on my arm. The shooting continued as I crawled towards the swinging chairs to hide from the gunmen. As the group [gunmen] were walking out they continued to shoot people that were lying on the floor. They shot me on my leg as they walked out,” he recalled.

The motive for the shooting is not yet known.

Additional police, including members of the tactical response team, known as Amabherete, have been deployed to the area.

“Police have come to the hospital to take statements from those that were injured in that shooting but I still fear for my life. I am also concerned about the safety of my family because we don’t know who wanted to kill us,” said Thanduxolo.

His mother said she was concerned that her son might not be able to walk again or be able to drive, having passed his learner licence test last week.

“I’m really worried about my child. He is going to finish his studies soon and will need his licence to apply for jobs and make a living,” said the mother.

“Police are not doing enough to protect us from criminals in Orlando. They always arrive late when we call them. Now that we had this shooting they are on every street but once the focus on this case dies down the deployed Amabherete will go away,” she said.

Yesterday, the community of Nomzamo, led by the local ward councillor, was preparing a memorial service for the victims.

The service is expected to be held opposite the tavern today.