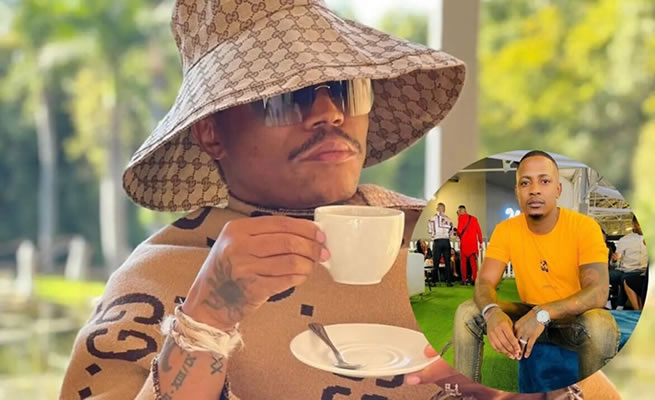 South African actor and businessman Pholoso Mohlala, who the streets would have you believe is Somizi Mhlongo’s new fiancé, has become a first time dad.

Taking to his Instagram stories on Thursday afternoon, Mohlala announced that he and his partner had welcomed their baby into the world by posting an adorable picture of himself holding his newborn baby in his arms, close to his chest.

This announcement came a few days after the actor posted a picture of his pregnant girlfriend on social media, captioning the post “Mama Kgato”.

Mohlala’s announcement has sparked some confusion amongst Somizi’s fans and followers after Twitter gossip blogger Musa Khawula alleged some time earlier this year that the pair have been dating for a while, so much so that they took their relationship to the next level and got engaged.

Is is well known that Somizi and Lasizwe do not get along. It turns out Lasizwe also briefly dated now Somizi's fiancé Pholoso Mohlala.

Lasizwe and Pholoso's relationship dates back to January 2022 and he moved on to date and get engaged to Somizi. pic.twitter.com/JEAtt6NpHJ

Musa’s claims, however, were soon rubbished by Somizi’s friends, after they revealed on the tweet that Pholoso Mohlala was actually in a relationship with a woman who was pregnant with his child at that time.

Although Mhlongo was not the one to end up with Mohlala, he revealed on the recent and final episode of Living the Dream With Somizi that he was back on the dating scene and has found someone who has shown a love interest in him.

“I’m glad that Phamo is here so that I can hear his point of view. I’m ready to move on and I’ve met someone. I like that he wants to be private.

“He has a career and a house, which means he pays a bond. He has a car and he is extremely into me. It’s been a month now,” said Som G.

The Idols SA judge assured his loved ones that his new bae is not a rebound, and that he has completely moved on from his ex-husband.

“It looks like I jumped into another relationship but it’s not like that. I saw this guy the day after my divorce. We have been dating for a long time and now it’s time for them to know. I’m officially off the market,” said Mhlongo.