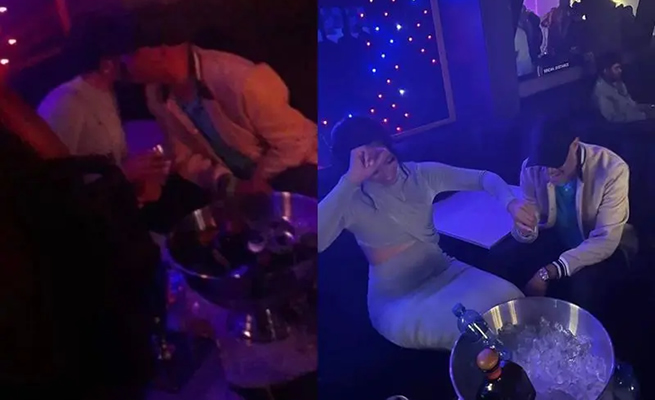 Television presenter Minnie Dlamini and her estranged husband Quinton Jones announced their divorce in a statement on 26 April. Almost a month after the shock announcement was made, Jones has been spotted with an unknown woman at a nightclub in Sandton, Johannesburg, who is believed to be his new girlfriend.

This comes after Minnie and Quinton denied slammed rumours that their marriage ended due to cheating as “baseless” in a joint statement.

Businessman and television producer Quinton Jones was spotted at Orthodox Lounge in Johannesburg with some friends, but it seems there was more to the night than just casual drinks…

Images of Jones seemingly getting up close and personal with a mystery woman were posted on Twitter by controversial entertainment blogger Musa Khawula on Wednesday 18 May.

The under-fire blogger claims that the woman is Jones’ “girlfriend”, but this has not been confirmed and remains a rumour.

Reacting to images of Jones and the mystery woman, tweeps had some mixed views…

“When you try and fake that you are happy but you are hurting inside,” wrote another tweep.

“I am happy for him shame.”

When you try and fake that you are happy but you are hurting inside https://t.co/gL8DZ1EV2q

I am happy for him shame https://t.co/kLVRkgQd7U

Following a claim that Minnie had cheated on Quinton with controversial businessman Edwin Sodi during their five-year marriage, they released a joint statement on 11 May denying these claims.

“Fabrications of such damaging manner are both unnecessary and hurtful in a matter that’s already sensitive to us.”

“Our shared priority is to remain friends and co-parent our son. We kindly ask that you allow us to go through our private processes without dragging ourselves, our families and our loved ones into baseless rumours and social media sensationalism,” read a portion of the statement.