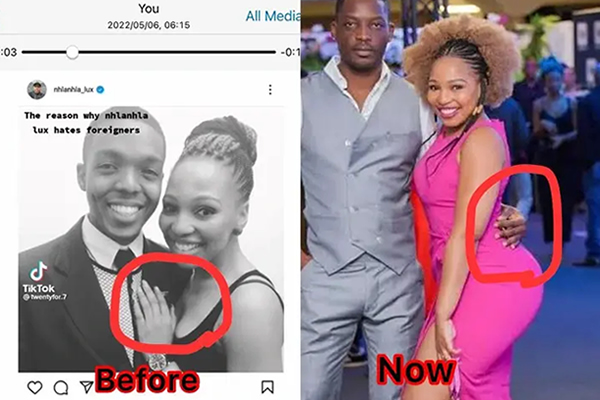 What could the the real reason why Operation Dudula leader, Nhlanhla Lux Dlamini, hates foreigners may have been uncovered finally.

Nhlanhla Lux has been at the fore front of fighting for foreigners to be deported from South Africa as he blames them for the high unemployment rate in the country among the youth and also the high crime rate currently facing the Southern African nation.

His vigilante group, Operation Dudula, has been going into townships and closing shops owned by foreigners and demanding companies that employ foreigners to fire them and replace them with South Africans.

However, some sections of the society feel that his hate for foreigners is not purely for the benefit of the country but also stems from his own personal feelings. Photos of him and former Muvhango actress Phindile Gwala, also known as Nonny, have been circulating on social media lately.

Judging from the pictures the two were once in a cosy relationship and people have concluded that their relationship ended after Nonny’s current bae and husband – a model and foreigner from Congo – Armando Ngandu, came and took her from him.

Their union has turned sour that even Phindile Gwala herself now strongly opposes Nhlanhla Lux's stunt against foreigners.

Now people think that this is why Nhlanhla Lux hates foreigners because they took his lover. A couple of day ago Phindile posted on Facebook that Nhlanhla was wrong to compare himself to Steve Biko for a while it did not make sense to the detectives uncovered that there is history between the two of them.