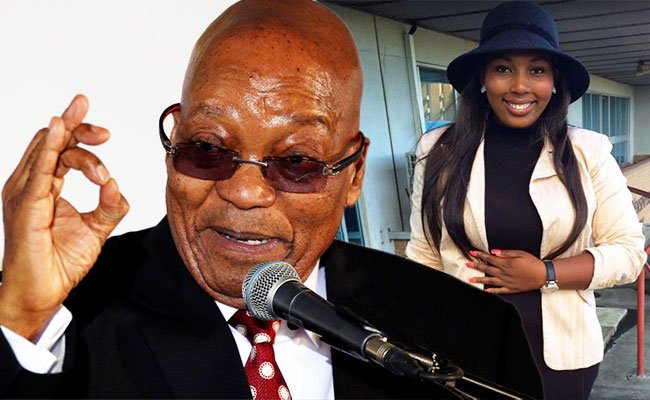 This was according to his brother and family spokesman Ray Zuma‚ who said yesterday that lobolo was not discussed outside of the families of the bride and groom.

“In African culture‚ lobolo is discussed between the two families. It’s none of your business! I said the same to the reporter who wrote the other story. It shouldn’t have been published. It’s not anyone else’s business‚” he said.


Ray was responding to a report that his brother had apparently not paid lobolo for his 24-year-old fiancée‚ Nonkanyiso Conco. Celebgossip.co.za has gathered that when Zuma first met Nonkanyiso when she was still a teenager, the girl was still a virgin, she had never tasted any penis, and Zuma was the first to shoot a bulls-eye inside her 'honey jar'.

Nonkanyiso’s father‚ Fartescue Conco‚ reportedly told the Isolezwe newspaper the former president had reneged on a promise he made to him telephonically that he would pay the dowry for the bride-to-be‚ who gave birth to his son three months ago. The son became Zuma's 24th child, and Nonkanyiso became a 15th woman to be impregnated by Zuma.

Conco claimed that his daughter and her mother told him that Zuma paid the family R184 000‚ which was apparently used to buy cars. But, according to him, this is not what was promised in terms of the lobolo payment. He told the paper he was angry because Zuma had disrespected him by not fulfilling his promise.

However, referring to himself as the only spokesman for the family‚ Nonkanyiso’s brother Shayimamba Conco said he was angry at his father for his rant to the newspaper.

“I am angry and concerned about this. I don’t know where this is all coming from. I have been unable to get hold of him. I may have to travel to Pietermaritzburg this week to see him‚ just to find out what this is all about‚” he said.

Shayimamba was adamant that Zuma had paid the agreed lobolo “timeously and in accordance with our practices”.

“I will have to contact the Zuma family spokesperson to explain that we know the payment was made. It makes us look bad, and I hope it doesn’t cause tension between the two families‚” he said.

He said his sister was concerned that her father’s rant may strain the families’ relationship.

“She is not worried about her relationship with Zuma. She is worried about these claims because she doesn’t know where it is coming from, but I assured her that we will get to the bottom of it‚” he said.