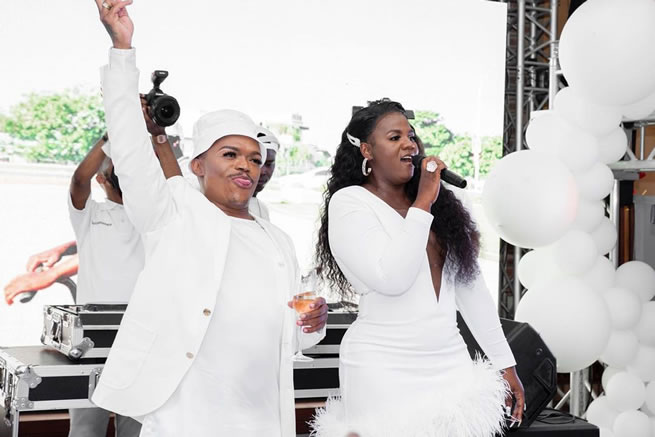 After spending the festive season with friends and family in the Western Cape, media personality Somizi Mhlongo jetted to KwaZulu-Natal earlier this week for the ‘mother of all white parties’.

Somizi was one of the hosts for the first annual ‘All White Party’ at Max’s Lifestyle Village in Umlazi, KwaZulu-Natal.

South African businesswoman, entrepreneur, philanthropist, television personality and socialite, Shauwn Mkhize, better known as Kwa Mam’Mkhize, also made her way back from her luxurious Namibia holiday to attend the festivities.

“The mother of all #whiteparties is happening today! I’m with my family and friends, trust me Kuzobamanandi @maxslifestylevillage. If you’re in Durban Umlazi, you know where it’s at,” Mam’Mkhize wrote on Instagram alongside pictures of her posing with Somizi, Tha Simelane, Hamilton Ngubo, Siphokazi Mkhize and Lungelo Ngubo.

Crowned one of the best restaurants in the world, the exclusive event was attended by guests dressed in all-white, sipping on Champagne and dancing the day away.

They also pulled out all the stops to make the day memorable for guests, who were dropped off with Durban rickshaws on the red carpet.

“KZN has more, my brother @maxslifestylevillage you have done well, painted the town white,” she wrote.

The flamboyant Royal AM owner also shared a short video clip of her ending off the evening with some dance moves.

“Then she dance it all off, ohh what an amazing event if you were not here you have really missed out, ANGIFUNI UKUNGASHO KZN has more …,” she captioned the post.