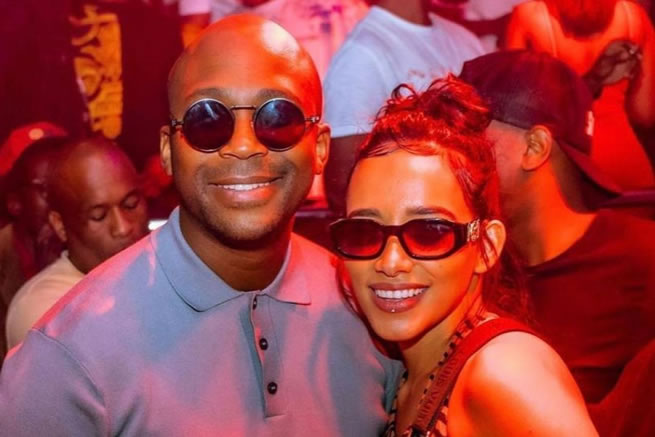 Naak MusiQ tweeted this in response to a “report” by social media blogger Musa Khawula who assumed that they were engaged based on a recent video shared by Robyn.

“I got my ring back” she wrote on a video showing her wearing a halo ring, similar to this Micheal Kors design on her left hand.

Naak MusiQ also tweeted and deleted an explanation that read as follows:

“Stop this, she didn’t reveal sh*t. Neither did she make any announcement, neither is it any of your business, to be honest.”

“She got that ring with her own money. Where she puts it is her choice. Stay in your lane. WTF!”

He seems to have deleted the tweets after it caused some confusion among Twitter users who thought that he was denying the existence of their relationship and not just the misunderstanding that he and Robyn were engaged.

Robyn is a nutrition specialist, a health and beauty influencer, and a fitness fanatic like Naak MusiQ.

The first official post publicly documenting their relationship was posted on Robyn’s account in November 2020, although they are rumoured to have been dating for much longer. Naak MusiQ has no images of himself and Robyn on his profile.

Even though Naak has not acted in a while, he is best known for his roles in the popular South African TV shows like Generations, Z’bondiwe and Isidingo.

Naak MusiQ also recently made headlines for agreeing to get into the boxing ring with rapper Cassper Nyovest after the latter’s fight with vlogger Slik Talk.