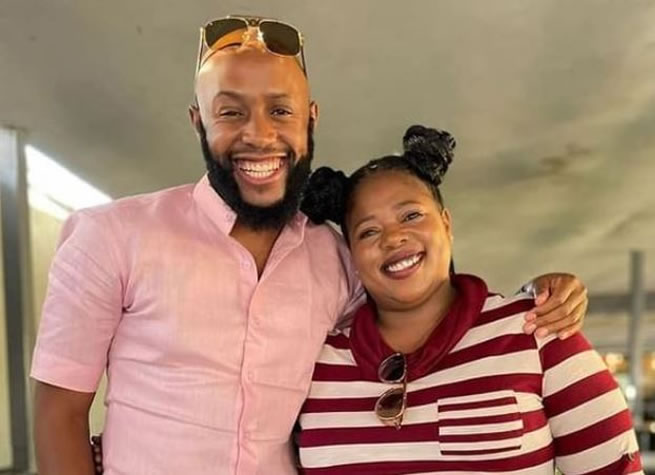 Somizi Mhlongo's estranged husband Mohale Motaung has been a victim of cyberbullying since he started dating and eventually separated from the former Idols SA judge and his family. Mohale's sister, chef Palesa Kwanaite, is particularly gatvol of the trolls.

Mohale, who has been posting happily on social media documenting his joyful December, has increasingly found trolls camping in his say section accusing him of several things, including marrying Somizi for fame and fortune.

The radio presenter often ignores the hate or slurs thrown his way but this past weekend his sister Palesa couldn't keep quiet. Palesa took to her Instagram to let Mohale's haters — whom she believes are mostly Somizi's fans — know that she wasn't going to sit by quietly while they rip her brother's reputation to shreds.


“I'm so bloody tired of these Twitter motherf***ers always being on Mohale's case,” she said.

In a now deleted Instagram post, Palesa also asked Somizi to get his fans to stay away from Mohale.

“Somizi, tell your stupid fans that my brother never wanted a cent from you. They are always talking k*k and I won't be quiet,” she added. 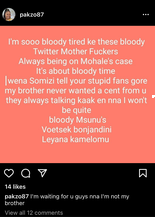 Mohale and Somizi's “fairtytale” love came to an end just over a year after their lavish wedding extravaganza in 2019.

Life for #SomHale, as they were affectionately known, turned upside down when a series of recordings of Mohale detailing alleged abusive incidents between the pair were leaked and went viral.

The aftermath of the allegations saw Somizi being asked by several companies he worked for to “temporarily” vacate his job while he dealt with his personal matters.

As for Mohale, he became a target for trolls on social media.