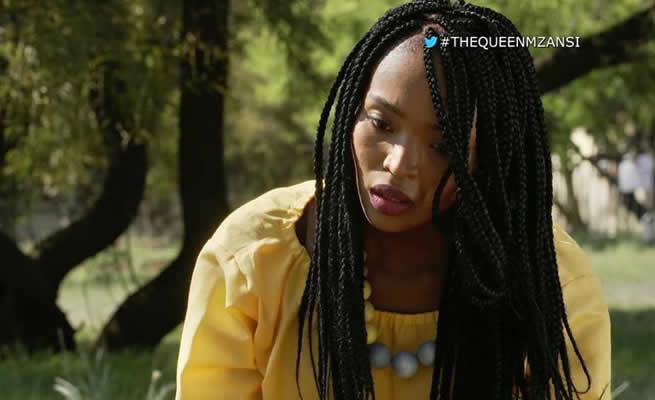 Fear-stricken actress Motsoaledi Setumo has fled her parental home in Kagiso, on the West Rand, after suspecting that her enemies were conjuring up an evil spirit or casting a bad spell on her.

Motsoaledi, who plays Mmabathoon MzansiMagic’s popular soapie The Queen, is now renting an apartment in Fourways, north of Joburg.

The sultry actress, who also played Thabitha Cele on Generations: The Legacy, bolted from her Krugersdorp home after discovering that her brand-new BMW 1 series and the garage in which she had parked it were sprinkled with what resembled blood.


The model, whose mother is quadriplegic after being involved in a car accident, got so frightened that she couldn’t drive her Beemer for a few days as she suspected that green eyed witches were out to kill her, said a source close to her.

The actress told Tshisa Live recently how she struggled to cope with her mother’s accident that happened when she was eight because noone in her family properly explained her injuries to her.

Motsoaledi said the matter was too sensitive and declined to discuss it with us.

“You will appreciate that this is a very sensitive matter which I’m still trying to digest. So I prefer not to talk about it in the media,” she said.

Sunday World learned from two of her friends, who preferred not to be named because they didn’t want to jeopardise their friendship with her, that the Thespian was living in fear as a result of the incident.

“She told us she had parked her car in the garage after arriving home from a shoot and went to bed. The garage and the house were repainted white as part of the renovations the family recently did.

The other source said Motsoaledi was frightened as she suspected that people who were jealous of her success were out to kill her.

“Can you blame her after what happened to her mother? We are not saying her mother was bewitched but would you blame her if she believes so? This is Africa my brother, black magic works.

“So eventually she vacated the house and she is now staying in the northern suburbs. She has left us here but we are not worried about that as long as she is safe wherever she is.

“All we can ask from her supporters and South Africans in general is to pray for her. She really needs your prayers now,” said the tipster.