Loliwe hitmaker Zahara was left fuming after a tweep brought up her supposed fall out with socialite and dancer Zodwa Wabantu, asking why this is something to bring up on the TL.

It all began after Zahara posted a video of herself promoting her latest single Nyamezela and her fifth album, Nqaba Yam, to be released on August 13. In the clip, the star was seen innocently taking a stroll while singing.

However, some tweeps weren’t here for the video. One tweep decided to take the opportunity to ask about the supposed beef between Zahara and Zodwa that came to light last month.

The tweep — clearly intending to troll Zahara — said videos like the one she posted “must” be the reason Zodwa “hates” her.

Not taking lightly to the comment, Zahara responded with “ndingenaphi mna?”, which means “how is this any of my concern?” 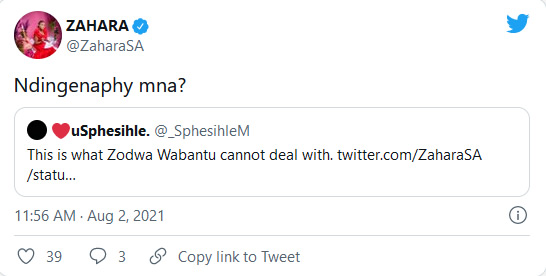 Another tweep chimed in, saying Zodwa should be getting involved by getting to know her opinion.

But Zahara had a question for the user.

Mzansi was recently made aware of the pair’s alleged beef.

This after a trailer for Lasizwe’s exclusive YouTube show Drink or Tell The Truth! revealed Zodwa “hates” Zahara and believes she is a b****.

The video left Mzansi in a shambles on the TL.

Even though he tried to avoid oversharing, Lasizwe admitted to TshisaLIVE that some secrets spilt on his show left him shook.

“I was shook half the time we shot this show. I couldn’t believe some of the things I was hearing — like Zodwa dropped files on Zahara, a huge exclusive. People will be shocked when they hear the full story,” said Lasizwe.

In a video teaser for the show released earlier this week, Zodwa can be heard saying: “Zahara, I hate her!”.