It is almost two years since the release of the international hit song Jerusalema was released by Kgaogelo “Master KG” Moagi featuring Nomcebo Zikode.

This success would not have been possible without the contributing authors Master KG and singer and co-writer Nomcebo.

Jerusalema was recorded on 11 August 2019, and after Master KG posted it on social media, it received positive responses from fans across the world, the song was officially released on streaming services on 10 July by Elektra France and Warner France.

Amongst many achievements, Jerusalema went to triple Platinum in Italy.

Master KG made history by becoming the first African artist to bag France’s prestigious NRJ Music Award in the institution’s 20-year history and Jerusalema was named International Song of the Year at the awards.

While the producer and record label boss are touring Europe, award-winning singer and co-author of Jerusalema Nomcebo Zikode has consulted with her legal team from Rosengarten & Feinberg and handed a letter of demand to Open Mic Productions after allegedly claiming to not have received a cent from Jerusalema sales and streams.

The 27th installment of the SA Music Awards (SAMAs) recently said that the International Achievement Recognition recipient is Master KG.

“Through his smash hit Jerusalema featuring Nomcebo, he reached the stratosphere of international fame and acclaim. The anthemic Jerusalema sparked an international dance phenomenon that took every corner of the world by storm. Videos of flash mobs and musicians remixing the song were awash across social media platforms, from North America, South America and Europe to Asia, Australia and of course the mother continent, Africa. He has since recorded a remix of Jerusalema with Burna Boy and Nomcebo and is currently riding a crest of a wave with his newest single Shine Your Light with David Guetta featuring Akon,” the music awards said when they announced he would be receiving the award.

According to an insider, Nomcebo has not received the alleged 50% royalties due to her.

“She has not been paid a cent for Jerusalema. They could not reach an agreement, so Nomcebo had to consult with her lawyers. The record label called her demand ‘ridiculous.’ How is 50% ridiculous. She wrote the lyrics and sang them, he produced the song. That should count for something,” the source says.

Last week Sunday World reported that the Xola Moya Wam singer was being sidelined by Open mic bosses and they had used Zanda Zakuza to go on tour singing Jerusalema with Master KG in Paris.

Another source says,” “Yes, it’s true. The story was all over the internet. I am glad it came out,” says the source.

“The problem started when Nomcebo asked for her share in royalties. That pissed them off and they started using Zanda. It’s never been done before and it’s not fair that where you write all the lyrics, record, and release but you are not allowed to sing the song because of a dispute,” says the source.

“I hear lots of people saying Nomcebo was just a feature, and this is the mentality that has made many female vocalists be oppressed. She is not a backup singer, but a lead vocalist to a song she co-wrote, surely she deserves to sing and get paid to sing her song. No offense to Zanda, I don’t know what their agreement was, but artists need to be paid for their royalties and be allowed to perform their music,” the source says.

Another insider says Nomcebo is unhappy.

“She is not okay at all. Without her vocals and songwriting, the song might not have been a hit. It is truly sad to see another artist get sidelined and not get what is due to them. But let the legal team handle it,” the insider states.

When phoned for comment, Nomcebo says she is not in a good place to talk.

“I really can’t comment on this. Please go back to your sources or speak to my management.”

The star commented the following on her social media page 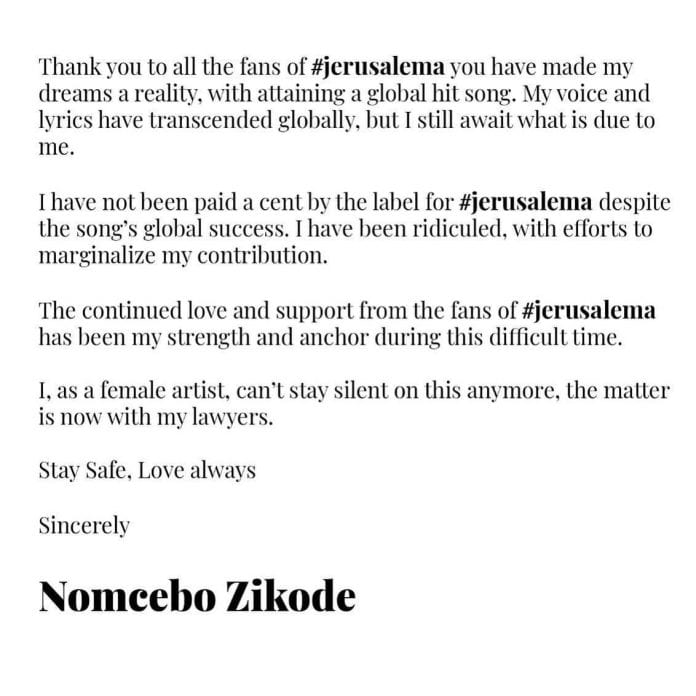 Nomcebo’s boss who co-found Open mic productions, Lionel Jamela, said she is still their artist and signed to them, and she is expected to be in studio soon to work on the new album, and there is no bad vibes between them.