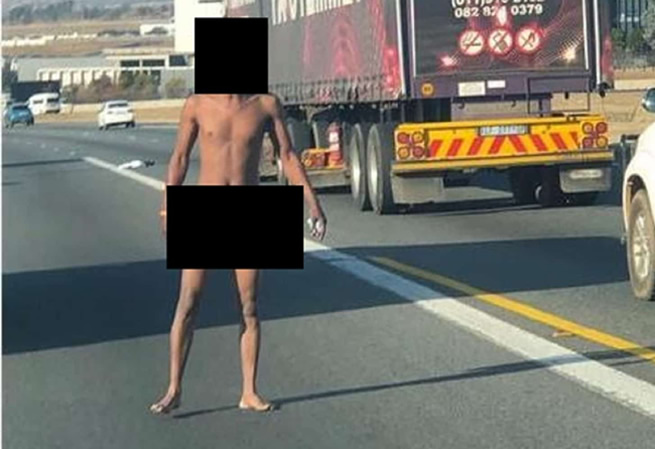 A naked man running across a highway and aggressively beating the bonnet of a car was not something a Pretoria couple ever expected to see.

Michelle Botha, a Pretoria east resident, said she was still shocked by the strange occurrence that happened in Midrand on Tuesday afternoon.

“My husband and I were on our way back home at 15:22 and was stuck in peak hour traffic on the N1 north,” said Botha.

“A naked man, with blood on his face and arms came running across the highway, straight towards our car.”

Botha said she and her husband, in complete befuddlement, looked on as the man started beating with his fists on the bonnet of their car.

“The man looked my husband straight in the eye as he repeatedly slammed his fists on our brand new car.

“My husband moved slightly forward to try and get the crazy man away from the car, and then he (naked man) fell on the ground pretending he was hit.”

Botha said after this strange performance the man got up and walked away.

“He must have been on something. He had a wild look in his eyes, definitely not normal.”

Botha said their brand new car had four big dents in the bonnet where the man had hit it. “We reported the matter at the Midrand police station,” she said.

Midrand police could not immediately confirm the incident.