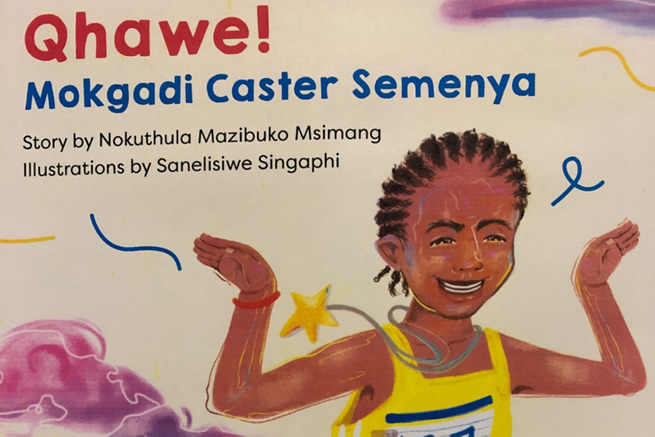 Msimang wrote the book in a form of a biography in collaboration with Caster Seemenya, but for children.

Speaking to eNCA, she said it was important for Semenya to have her inspirational story told in the form of a children’s book.

“When I spoke to Caster she was over the moon as she loves education and believes that children to learn and go to school,” Msimang says.

“It is also a story about how we should focus on children and support and nurture children.”

Semenya’s grandmother, whose story is shared in the book, has always encouraged her granddaughter to keep practicing her running until she became the fastest girl in her village.

A young girl who grew up in Limpopo, Semenya’s story is about “hard work and always going after your dreams”, Msimang says.

Qhawe means hero and Semenya became South Africa’s hero when she won a gold medal at the 2016 Olympics. She has gone on to win several other accolades, although being met with controversy over her gender.

World Athletics has banned Semenya from competing in any track event between 400m and 1.6 km unless she takes drugs to suppress her hormones. This will prevent her from defending her 400m title in Tokyo this year. She was born with a condition that causes her to have higher testosterone levels than other women.

Semenya continues to be a hero, taking her case to the European Court of Human Rights challenging World Athletics’ ruling.

This is not the first book to be written about the athlete for children. In 2018, author Jeremy Daniel told Semenya’s story for readers aged 10-14 years. The biography shared Semenya’s story from her challenging childhood in rural Limpopo and her tertiary education at the University of Pretoria to becoming a world medalist.

Qhawe! Caster Mokgadi Semenya is available for pre-order and will be in book stores at the end of the month.