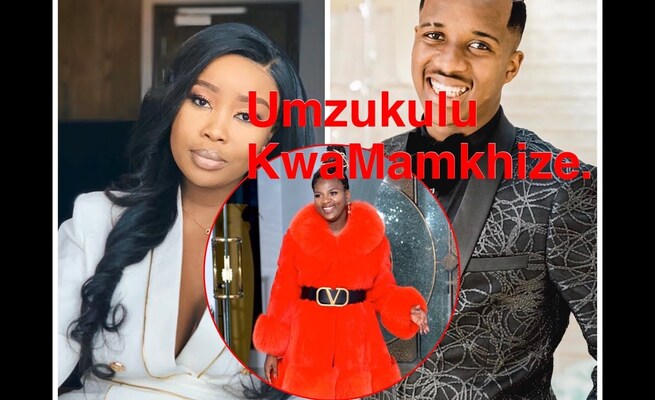 There seems to be trouble in paradise between DJ Sithelo Shozi and her baby daddy Andile Mpisane.

The couple has made headlines a few times and topped Twitter trendslists a few more times over their relationship and age difference. Andile, a Ben 10 is 20 years old, while his sugar mama Sithelo is 27, they have a one-year-old daughter together.

Well, many will be pleased to know that the Royal AM Football Club chairman, musician and footballer has reportedly found a partner (who is his peer) in dancer and musician Kamo Mphela.

According to City Press, sources in their circle have revealed that they have been secretly dating and it has actually been four months now. This may come as no surprise to some, after all, there has been lots of speculation as Kamo has been spotted in Durban a lot.

“Kamo’s at eThekweni every weekend that she isn’t booked to perform somewhere else,” a source said.

Another source revealed that the two musicians were spotted at a luxurious nightclub in Morningside, Durban, three weeks ago and they were all over each other.

The source also claimed that, unlike Sithelo's relationship with Andile, this time Shauwn 'MaMkhize' Mkhize approves of her son's current love interest; especially because Kamo is younger.

“She’s younger, so the family’s obviously more affectionate towards her and even MaMkhize doesn’t mind her existence in Andile’s life," the source explained.

It was also reported that DJ Sithelo was moved to the Mpisane home in Pietermaritzburg and was allegedly bought a Mercedes-Benz G-Class. She was told to stay in the Pietermaritzburg family home, which is also their clubhouse.

Sithelo was fuming when she was asked to comment on the matter, further denying dating Andile.

“Don’t ever call me, no matter what happens. I never said I dated Andile. You can make up your own theories and phantom stories. Confirm them with people who told you,” she was quoted as saying.

Andile and Sithelo's relationship caught the attention of social media when, during a Q&A on her Instagram, she posted a picture of herself and the 'Umcimbi' hitmater; referring to him as bae. This after the couple had already had their baby girl.

Their relationship was not well-received due to their age gap. It even got uglier when ut was reported that Shauwn does not approve of the relationship, accussing Sithelo of falling pregnant in order to get close to the family.

Shauwn claimed that she was not aware that Andile had impregnated Sithelo and said she would only entertain Andile's wife “Woow! I don’t know anything about Andile’s girlfriends. I can’t believe that Andile can hide something so big from me. We are very open to each other but I can’t be telling him who he must date and who he must not. Andile is still young and I can’t involve myself in his private affairs.”

Despite their differences, Baby Flo has been a blessing in MaMkhize's life, who during her first birthday, penned a heartfelt message to her on Instagram.

"Today is a very special day for me as this time last year, our family tree was extended. We were blessed with a baby princess.

"Yes, I was never ready nor prepared but boy oh boy. I never understood the impact and joy that she would bring to our family. I would do anything and everything in my power to protect her from this world as she is one of the thing I call my place of safety and comfort. Every time when I come home and I see her my day is full, I LOVE YOU BABY FLO.”