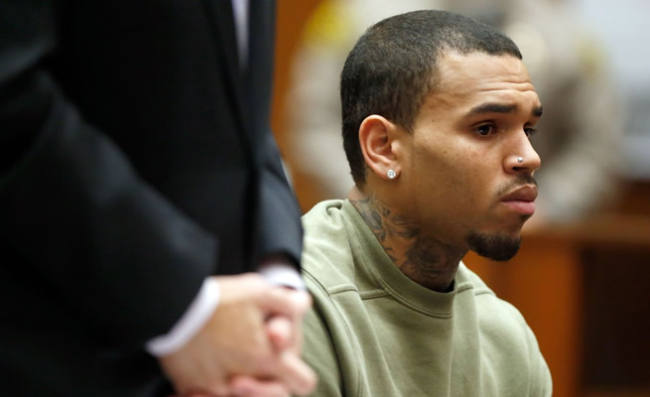 Chris Brown was stopped by police who were waiting in the wings to detain him following his concert at the Coral Sky Ampitheatre in West Palm Beach, Florida, on Thursday night.

Law enforcement sources have told TMZ that the Loyal hitmaker was arrested over an outstanding warrant out of a nearby county, but the exact details are not yet known.

Prior to the show, he wrote on Twitter: "WEST PALM BEACH TONIGHT! #HeartbreakOnAFullMoonTour (sic)"

Brown has recently been performing on his Heartbreak on a Full Moon tour and is due to take to the stage at the MidFlorida Credit Union Amphitheatre at the Florida State Fair Grounds in Tampa on Friday.

The 29-year-old Kiss Kiss hitmaker – who has four-year-old daughter, Royalty, with his ex Nia Guzman – has had previous run-ins with the law, such as in May 2016 when he was thrown off a plane for allegedly smoking marijuana.

A week beforehand he received a visit from police following complaints from nearby residents after he and a friend began doing doughnuts on all-terrain vehicles in the street, including on a number of lawns, and racing up and down the road at around 6pm.

Chris was also infamously convicted for assaulting his then-girlfriend Rihanna in February 2009, for which he was sentenced to five years of probation, one year of domestic violence counselling, and six months of community service.

His probation was finally lifted in March 2015.

In 2014, Chris spent nearly three months in jail for violating his probation after allegedly hitting a man in Washington, and had his probation revoked in January 2015 following a poor report which claimed he had a "knack" for finding trouble and had been present at two shootings, but he was not involved in either.