It was billed as one of the most highly anticipated weddings in socialite circles.

A beautiful Durbanite girl from a wealthy family tying the knot with one of South Africa’s premier artists.

But the late Anele Tembe and AKA’S whirlwind romance was nothing as pictures on social media suggested, as claims of drug abuse, violence and physical abuse start to emerge.

Celebgossip has learnt that accusations of drugs and physical abuse characterised the relationship between AKA (real name Kiernan Forbes) and the late Tembe, who died on April 11 after falling off the balcony of a Cape Town hotel.

According to Sunday World, there was a violent commotion in their hotel room just before Tembe’s alleged suicide, something which has triggered a police investigation.

The police have thus far taken three statements from AKA, who performed at the Nedbank Cup final yesterday in Free State.

Even last Thursday, the police took another statement from AKA after they took the first statement from him on the Sunday of Tembe’s death and the Monday following her death.

In one of the disturbing videos, which has been seen by Sunday World, the muso is breaking down a door with a terrified Tembe heard pleading with him to calm down. However, AKA would have none of it as he is seen and heard hurling expletives at Tembe.

According to Tembe, what started the fight was her calling out AKA for smelling like fish. She also accused AKA of being high on drugs.

The incident happened in one of their hair-raising domestic violence incidents that occurred at the rapper’s house in Bryanston, Joburg on March 13, a few weeks before their much-vaunted lobola negotiation in Tembe’s home province, Kwazulu-natal. In another video on a separate occasion, Tembe could been seen hurling objects at AKA and vandalising furniture and AKA’S awards, including his SA Music Awards.

In the video AKA, who dated Bonang Matheba and DJ Zinhle, with whom he has a child, could be heard saying Tembe is under the “influence” of drugs.

“I got somebody here under the influence, trying to jump off the balcony,” meanwhile, Tembe is curled on the floor crying.

The relationship, which lasted less than two years until Tembe’s tragic death last month at a Cape Town hotel, was interjected by numerous abuse episodes, with both parties pointing the finger at each other.

Sunday World has also seen a long Whatsapp message she wrote to AKA’S mother, Lynn Forbes in which she was seeking guidance about the alleged physical abuse.

It is not known whether Lynn responded to Tembe.

“When [the] dust has settled… find something you could do with her in this business area,” to which AKA replied: “Thank you baba. I will ride the storm out and quietly hope she calms down and engages me properly. I hope she doesn’t’ do any [thing] stupid in the meantime.” 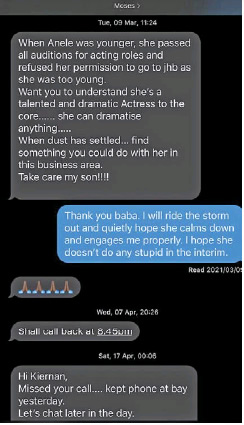 Some media reports have suggested Tembe was suicidal and probably committed suicide, an allegation her father, Moses Tembe refuted at her funeral.

“As Anele’s father, I categorically state that Anele was neither suicidal nor did she commit suicide. “We must as a matter of priority deal with the scourge that bedevils our youth. Alcohol, which is overused, and drugs. Fellow South Africans we better wake up and smell the coffee, we have a serious problem with substance abuse.”

A source with intimate knowledge of the relationship, who did not want to be identified for fear of victimisation, said Tembe was abused by AKA.

“In my effort to fight GBV, I, today, release a video, taken by Anele, of Kiernan ‘AKA’ attacking her. The video demonstrates the vicious attacks that she was the subject of.

Anele reported the incident to me. She then sent me the video of the attack,” said the source.

“Anele Tembe, who was dating and later engaged to Kiernan ‘AKA’ Forbes, was a victim of severe violence at the hands of AKA.

My beloved friend, a daughter and sister to many was a victim of gender-based violence, an act that has become a scourge in our country.”

The source said Anele had sought protection on many nights whenever AKA, whom she said became extra violent whenever he had allegedly taken drugs, attacked her.