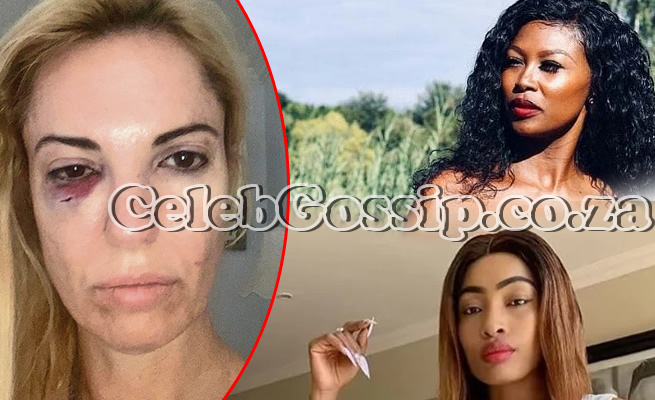 They are the first ladies of the Johannesburg social scene: perfectly poised women who fill their days with leisurely luncheons, serious shopping and grand getaways with the girls. But things aren’t always as rosy as they seem for the cast of The Real Housewives of Johannesburg (RHOJ).

The pair have always had a frosty relationship – at one point they almost came to blows after Christall tried to snatch Brinnette’s wig.


Now it seems reality TV is getting way too real. What started out as a fun night out turned ugly when Christall was beaten black and blue at a popular nightclub.

Christall claims she and Brinnette had words and that things spiralled out of control when Gugu Khathi, Brinnette’s close friend, got involved and punched her in the eye.

“At one point, Gugu went for my throat with her hands,” Christall says. “She pushed so hard it felt like I was going to lose my windpipe.” Gugu, however, says she was acting in self-defence after Christall threw the first punch.

The altercation took place a month ago while they were filming scenes for the reality show. Since then, they’ve filed charges against one another and M-Net has cancelled RHOJ.

Christall is crestfallen by the channel’s decision. “The show meant the world to me,”  “My fans saw me as a role model who stands up to bullies. Now there’s no comeback for me.”

But Christall, a qualified lawyer, isn’t letting things go without a fight. She’s opened a case of assault against Gugu because she wants to ensure justice is done, even if it’s not in front of the cameras.

“I’d like to show everybody we get up and move on – we don’t just cry about it,” she says.

At first she had no intention of involving the law and just wanted to put the ugly incident behind her. But that changed when she learnt Gugu and Brinnette had brought charges against her.

CHRISTALL and Brinnette didn’t exactly hit it off when they met in the first season. “She was the first girl to tell everyone she didn’t like me, and it went both ways,” Christall  said in. “The only reason I speak to her is because she’s in the new season and I just have to grin and bear it.”

The women recently returned from a trip to Kenya where they were filming for the third season. Gugu, a well-known businesswoman and the wife of popular musician DJ Tira, had accompanied them after joining the cast.

When they hit the town for a fun night out, things went pear-shaped when Christall confronted Brinnette about the trip.

“I asked why she, as the host, was so cruel and nasty in Kenya,” she says. “I wanted to know why she held a dinner just to attack me and get the other girls in the group to call me the troublemaker.

“Gugu had no bone to pick with me but for some reason she took it upon herself to be the hero in Brinnette’s cause,” she adds.

Things got heated, Christall says, when Gugu started tapping and slapping her on her shoulder and the side of her arm. “I pushed her onto the couch just to get her away. But she stood up and came at me, so I pushed her again.”

They continued arguing for about five minutes before Christall walked out of the club to cool off in the parking lot. When she returned, she was surprised to see Brinnette and Gugu had changed into different clothes and sneakers, but she didn’t think anything of it.

Christall claims the two then followed her around the club and continued to “terrorise” her. “The whole time they were saying nasty things and using hand and body gestures to intimidate me and scare me.”

She was relieved when a bouncer came to her rescue. The beefy security guard took her to a lounge area where she sat while he stood in front of her to protect her. But she says the women continued to fight her around the bouncer.

At one stage Gugu gestured for Christall to come closer so she could tell her something. “Next thing she packed that punch in my right eye,” Christall says. “I can’t tell you how sore that was. I was bleeding and had a cut below my eye.”

CHRISTALL left the club to seek medical attention. A month later there’s still some bruising around her eye but she’s more hurt by the behaviour of her former co-stars. She claims Brinnette and Gugu continued partying after she left the club bloodied and bruised. “She could have kicked me on my leg. Why did she have to do that to my face,” she says.

“As someone in their 40s, I really look after my skin, especially since I’m on TV.”

She also says she’s enraged the camera crew kept filming instead of jumping in and breaking off the fight. “I got very angry about that.”

Nomsa Philiso, M-Net’s director for local entertainment, confirms the show has been discontinued.

“This is due to unforeseen circumstances experienced during the production of the show,” she said in a statement.

Meanwhile, Gugu has said on social media that she acted in self-defence after Christall punched her.

But this is “absolute nonsense”, Christall says. “If someone pushes you, you don’t hit them in the eye with your fist.

“When she hit me, I was sitting down. There was no threat to her.”

Gugu didn’t respond to numerous requests for comment despite the WhatsApp messages sent to her appearing to have been read.

Christall and Brinnette are the only original cast members of RHOJ. When the show first aired, Christall became one of the most talked-about characters. Her claims that she owned a private jet and shared a room with Charlize Theron when they started out as models in their teens resulted in some showdowns and side-eyes.

But the blonde who loves having a good time quickly became a hit with fans of the show.

Christall also won over new fans when she launched a singing career on the Real Housewives of Johannesburg.

The Wonder singer is still in touch with fellow housewives Lethabo Mathatho, Mpho Merriweather and Lebo JoJo Gunguluza, who have all reached out to ask how she’s doing.

Christall says she’s now taking some time to “understand and digest all of this” but wants to be back in front of the camera again. “I think people enjoy seeing me. “I’d like to do my own show or perhaps a magazine show – I want to bring some entertainment to the party that’s not destructive.”

Brinnette, meanwhile, isn’t yet ready to share her side of the story.

“Our case is still under investigation and we are busy with our legal team,” she tells YOU.

“As soon as we are ready to talk, we will definitely let you know.”