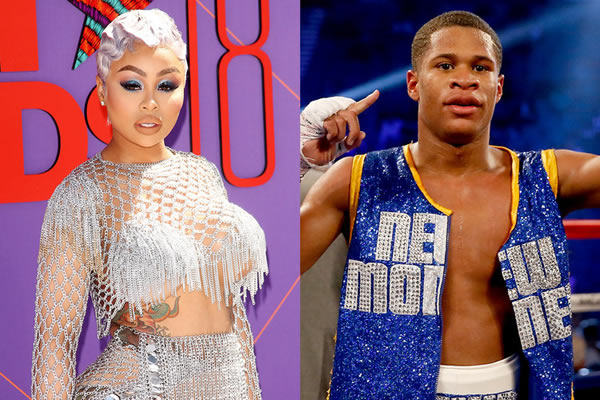 Not only that, according to Black Sports Online, she’s even letting him drive the Ferrari her ex and baby daddy, Rob Kardashian bought her, and he [Rob] isn’t very happy about it. The ex lover is said to be extremely angry that the car he bought with his own money is now being driven by a new teenage bae.

However, Rob Kardashian is extremely controlled because Blac Chyna's new lover nicknamed "The Dream," Devin counts boxing great Floyd Mayweather as his mentor in addition to that, he has had 19 wins, 13 knockouts and no losses. So certainly the former boyfriend has had to keep his tail well tucked between his legs.

Last month, Blac Chyna broke up with her 18-year-old rapper boyfriend YBN Almighty Jay amidst rumors of him impregnating another woman. She also accused her children's fathers Rob Kardashian and Tyga of being deadbeat dads on Father's Day.

And now, it looks like she had another teenage paramour waiting in the wings, possibly before she broke up with YBN Almighty Jay. The mother-of-two posted a snap of her current bae on her Instagram account and later deleted it, Vlad TV reports.

Chyna added the caption: "Hi babe @realdevinhaney" and was met with a heart emoji from the boxer as a response.

Twitter was quick to react to the news of Blac Chyna’s newest teen bae:

she’s a dirty ass money hungry pedophile & idc what anybody has to say about it. y’all bashed tyga for years bc he dated kylie bc she was a teenager but nobody has anything to say about how blac chyna is doing the same damn thing bc she’s a woman https://t.co/ORsfaJO26r

What is it with Blac Chyna and teenagers??? It's getting kind of disturbing. What would they even be talking about???

As in ehh
Blac chyna is just rotating teenagers https://t.co/ykWcji9QkQ

Blac Chyna went from a reality show on E! to exclusively dating teenagers and I miss when she didn't make me feel uncomfortable gjdfhkgjh

So Blac Chyna just gonna date another teenager. Whoaa, child the Ghettooo! If I was Rob I’d be trying to get my child.

Blac Chyna has a thing for teenagers