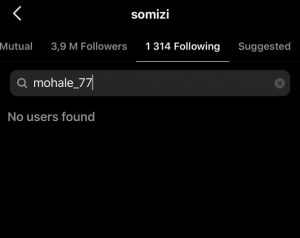 Relationship expert Paula Quinsee, who was a consultant to “Married at First Sight SA”, said that while it was not the norm to unfollow your partner on social media, there could be many contributing factors.

“It could be something like rage or anger towards your partner over something they did, it could be insecurities and even professional jealousy”, she said.

Quinsee said couples could agree not to follow each other or have one unfollow the other.

“Being in the public eye can be very exhausting, people watch your every move, and sometimes celebrities want a break from that.

“Somizi has always been in the public eye but this is fairly new for Mohale and that pressure comes with its own set of problems.”