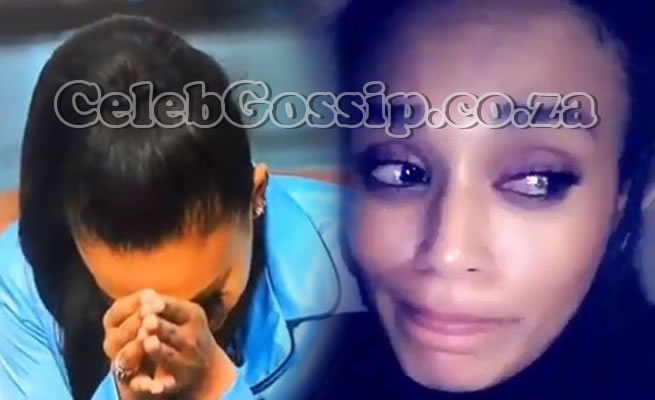 The highly anticipated last news bulletin of veteran Xhosa news reader Noxolo Grootboom evoked many emotions yesterday. Many including internationally renowned actress Pearl Thusi took to their social media platforms to celebrate her. However, Pearl has received a lot of backlash from tweeps after she shared pictures of her and the legendary news anchor.

Pictures that show her kneeling down and hugging Noxolo Groootboom made rounds on Twitter. Tweeps were not impressed with her pose as she quickly joined the top trending topics on Twitter. she was put on blast many saying she is just acting up. @Sphaththabo said: “The acting right there is better than her entire acting career ”

Pearl was also bashed for a video of herself crying that she shared on her Insta story of her crying while talking about Noxolo, on the video the sobbing Pearl says: “Yoh guys I’m punished, just watched Noxolo Grootboom’s farewell, iyoh I feel like my childhood is been stolen oh my God and to just watch someone being so graceful and so honest after all the inspiration she’s given us

“Yoh what a queen man, I wish I was home to watch her but like thank you so much for everything and your kindness and your humanity. Wow, Noxolo Grootboom forever. ”

Pearl is currently out of the country. She is in Thailand living her best life filming for the second season of Netflix’s martial arts series called Wu Assasins.

Actress and TV presenter Minnie Dlamini-Jones also had her fair share of backlash this morning after tweeps called her out for allegedly lying, this after she tweeted that: “My mother says when I was about 4 years old I used to get super excited to see her on-screen and scream her name around the house.” Minnie has since deleted the tweets.

Tweeps did not buy this and started calling her out @ChrisExcel said: “Minnie Dlamini deleted her lies at 3:05 am so that she won’t trend this morning. And guess what, we have the screenshots…”

Noxolo Grootboom wrapped her last news bulletin on an emotional note yesterday on SABC 1. The president also announced that he moved his address of the nation from 7 pm to 7: 30 pm to allow views to watch her last bulletin as she retires. Last week the public broadcaster announced that she will be retiring after 37 years of service. She continues to be celebrated.

Pearl Thusi has been grabbing headlines for the wrong reasons this month. A few days ago she stood accused of leaking her best friend DJ Zinhle's top secrets about her love life and her new boyfriend's details.

DJ Zinhle reveled that she is troubled by the fact that someone in her circle is continuously feeding the media confidential information about her personal life, and her loved ones' as well. Without revealing too much about where her troubles stem from, she said this shortly after her bae made headlines after suffering a life-threatening fall whilst on set.