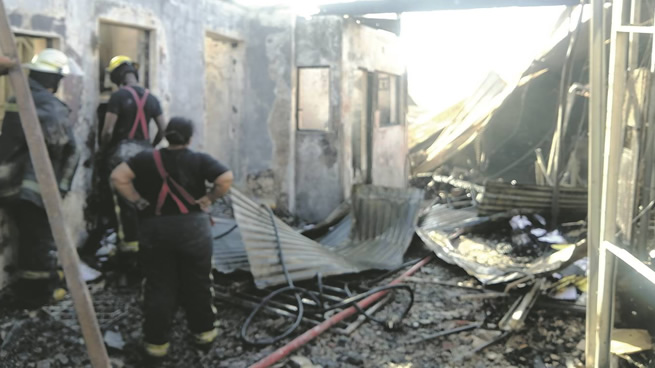 Its traumatic enough to lose a loved one.

But what’s even worse is when a fire attacks the very building your loved one is being stored in!

Families watched in horror on Sunday as one of the Eastern Cape’s biggest funeral parlours was gutted by a fire.

Shweme & Shweme Funeral Parlour in Zwide kasi, Gqeberha, was almost completely destroyed, but the mortuary and admin blocks were not damaged.

Bystanders took photos and videos of the fire and posted them on social media, which caused panic among those waiting for loved ones to be buried.

“The fire started in our storeroom, where we keep our coffin-lowering equipment and mats, at about 8am.

“I also counted R1 million in the morning, which was in our safe. The fire destroyed everything. Even coins were burnt beyond recognition.

“The fire moved very fast. Even our security guards, who’re on site 24 hours a day, don’t know what caused the fire. It only ended at about 2pm.

“We managed to remove about 50 bodies being stored. We’ve sent them to government mortuaries.

“Our admin block, where we have the names of the deceased, was not affected.”

Nyoka said 99% of the building was completely damaged.

“However, funerals scheduled for this week will continue,” he said.

“We appeal to our clients to come forward and to not listen to social media stories.”

Yoliswa Dick (50) said her sister’s body was taken to the funeral parlour on Friday, 26 March.

“I asked the cops and firefighters about the bodies and they said everything burnt,” she said.

“However, the owner says everything is alright. I don’t know what to believe any more.”

Captain Andre Beetge said: “I can confirm that there was a fire, but no case has been opened yet with the police.”