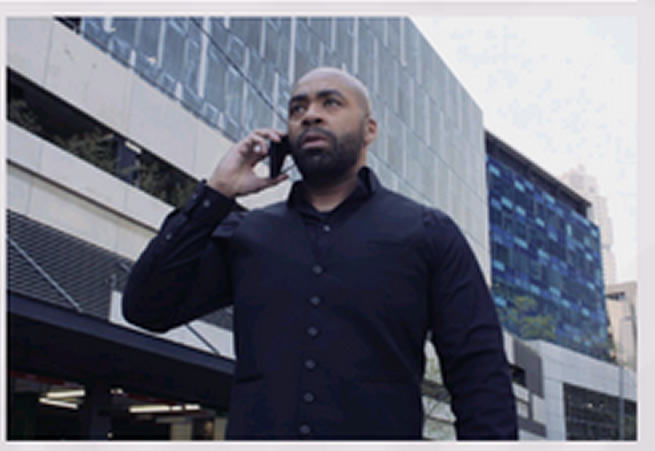 Following his return to the small screen in the action-packed six-part series Kings of Jo’burg, the actor and businessman talks about wealth and being part of a Netflix African Series.

Q: Tell us about the show and your collab with Netflix?

We started developing the show about four years ago, and usually it doesn’t have a name yet at that stage. So, you come up with an idea based on a premise. I began with an idea that I wanted to develop a show called Kings of Jo’burg, and took it from there.

Pretty much every project our company had done had been female-centric – that was the latest craze on TV in South Africa. A lot of content is female-driven, but we needed to do something different. It’s a great direction, going back to something that people did in the past, something male-dominated for an audience mostly comprised of women who don’t want to watch guys beating each other up and chasing each other with guns. We wanted to tell a story to which everyone can relate.

I had to humanise guys who are usually considered macho, so I wrote it down as I saw it in my head. Then, I set up a meeting with a brilliant scriptwriter, Linda Bere, for a female perspective.

How is this character different from those you’ve played before?

SF: I’ve been typecast in similar roles for the past four years on The Queen, so people wouldn’t have expected me to play that character. I never expected to be in Kings of Jo’burg. It was when we were casting that the show’s director suggested I do something different, and that’s how I jumped into playing Simon “Vader” Masire.

How he’s different from other characters I’ve played is that he’s very greedy. I don’t think I’ve played a character before who’s so driven by power and control. He feels like he has power and is in control, but his greed has blinded him, and in his quest to acquire more power, fails to see that he loses more than he chases. it’s generational. I came from nothing. I grew up with nothing. It’s a pity that in this industry, people only know you by your name, not your story. Wealth isn’t money; it’s building a legacy for your children, so they don’t have to suffer the hardships you did. Beyond material possessions, physical, emotional, mental and spiritual wellbeing are also forms of wealth. I don’t care how much money you have. When you’re in a position to create, you have to allow your heart, soul and spirit to learn.

‘Wealth isn’t money; it’s building a legacy for your children, so they don’t have to suffer the hardships you did’

How has that definition changed or evolved for you?

SF: Having kids was sort of the first thing that altered my perspective. As much as you want to provide for your children, you need to give them the tools to create for themselves. What’s been life-changing for me, and it literally changes every year, is that as long as I’m still intact, and have both hands and feet, then there isn’t anything I can’t accomplish.

Another thing that’s changed is that I’m hungry, and I work harder for inner peace and happiness than anything materialistic. What I’ve realised is that the more I focus on that, the more work I get. It’s like my whole being is open to the spirit of gratitude. That’s, in essence, what’s been happening: I’ve been chasing inner peace, which helps me to attract opportunities.

What can viewers expect from Kings of Jo’burg?

SF: I think they’ll be proud of how we represent the city of Joburg, not only that but the fact we created a show that also features Nigeria, South Africa and America. We hashtag the show using #Africaamericaconnect, and the idea is that, as a continent, we can create things the world can see and relate to. It doesn’t matter who you are or what part of the world you come from, everyone can relate to the idea of the family dynamic, being in a circle, surrounded by people who feed you, and that you in turn feed.

In South Africa especially, we’re all so desperate to attain Hollywood stardom. In doing so, we may compare ourselves with overseas creatives and feel like we’re not as talented. But South Africans are talented, and the rest of the world looks up to u

How do you handle criticism?

SF: One of the most valuable lessons my father taught me is that in life you need to understand that if you’re doing nothing, no one will pay attention to you. He would it say in Tswana, ‘Ntja ga e bogoele koloi ye e emeng’ (meaning, the dog doesn’t bark at the parked car). As human beings, we’re emotionally affected by criticism, but it’s about realising criticism means you’re moving, that the louder the criticism, the larger the magnitude of your movement. If someone thinks negatively of something, they’ll never see it in a positive light.

What I want people to take away from this is that they need to focus on their vision and what they want from it. They have to be like a horse in a race, focusing ahead so as not to be distracted by the other horses. That’s always been my approach. You cannot focus on or succeed at anything if you stop every time the going gets tough.