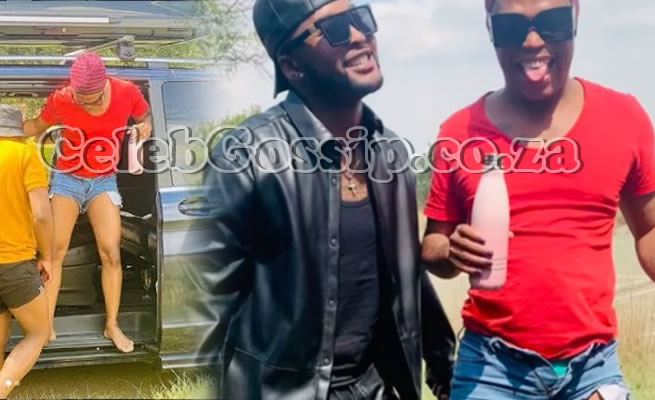 Somizi uploaded a video to Instagram which racked up an impressive 463 000 views in which he has a wardrobe malfunction which he quickly corrects while flashing a devilish smile and never missing a beat.

While this was happening Vusi Nova was giving it plenty wearing what looked like a leather ensemble before being joined by a large man wearing stripes who had some impressive dance moves.

Fans commented on what they loved about the video with some people saying that they had never been so confused in all their lives.

Here are some of the reactions to his video from his fans:

nhlanhlaluck_q: "Was it a hot or cold day? keep dancing guys ."

lehlohonolomonatisa: "Somizi for president lona. Noticed that zip isn’t closed. Zips up and life continues. Is there anything mote humane??? Ai suka morning made ."

Interestingly, so packed was Somizi's pants that the zip of his 'bum short' couldn't zip up and fans are left to fascinate as much as their fantasies and imaginations can go.

Meanwhile, there has been a lot of noise surrounding Somizi Mhlongo and his husband Mohale Motaung. The two have bee spotted in various social media posts, sometimes without their wedding rings on.

Somizi posted a recent pic to Instagram where he is posing with his close friend Vusi Nova, on Somizi's right hand a ring is clearly visible.

His fans have noticed that Vusi Nova is also wearing a similar ring on his left hand leading to wild speculation.

Few weeks ago, Mohale served Somizi divorce papers and ever since then, there has not been any news about the two. Well, looks like Somizi is not bothered about his alleged failed marriage as he goes on another vacation with his bestfriend.

Somizi and Vusi have been the talk of the Twitter streets for being “unusually” close over the last few months, leaving Twitter puzzled about his relationship with his husband, Mohale.

Around Christmas time, Tweeps went into over-drive, asking why Vusi bought Somizi a birthday cake, when Mohale already got him one. Tweeps went as far as comparing both the cakes to see which is better.

Vusi Nova had to come out to set what he claimed was the record straight on their relationship before claiming that he is not gay.

Ever since rumours of 'trouble in paradise' between Somizi and his husband Mohale began to swirl, fans have become "suspicious" of the close relationship Vusi and Somgaga share.

In the latest episode of What’s Your Poison?, a podcast hosted by seasoned broadcaster Jon Savage, Vusi got candid about his life, his struggle with drugs and his relationship with SomG.

“I have known Somizi for 16 years. I met him before I even got into the music industry. He’s so real and supportive,” Vusi explained.

“People out there are saying that we are dating but we’re not dating. We have mutual respect for each other and we trust each other a lot … With us, it’s realness all the way. It’s been 16 years now and we’re still going strong.”