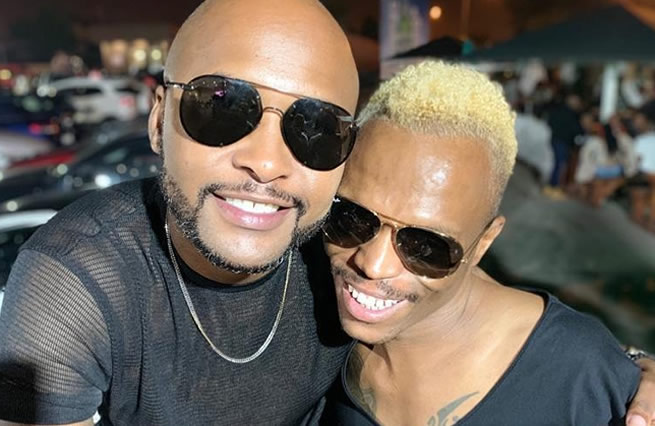 True love is indeed flying in the air as Somizi and his bestie, Vusi Nova are going out, yet on another “bestication” again.

The two have been going out together recently even when Somizi, a married man, was having issues in his relationship. In February, Vusi Nova shared a video of himself, his boys and Somizi taking a young trip.

Well, it looks like they have decided to go on another bestication. In a new post, Somizi stated that they promised each other that they will be going on vacations every 2weeks this 2021. The media personality also mention that he has been enjoying every moment so far.

“We promised each other that 2021 we are doing vacations every 2 weeks…..so far so good…..bestiecation,” Somizi captioned.

Earlier this year, Somizi and Mohale was all over social media following rumours that they are not together anymore.

Few weeks ago, Mohale served Somizi divorce papers and ever since then, there has not been any news about the two. Well, looks like Somizi is not bothered about his alleged failed marriage as he goes on another vacation with his bestfriend.

There has been a lot of noise surrounding Somizi Mhlongo and his husband Mohale Motaung. The two have bee spotted in various social media posts, sometimes without their wedding rings on.

Somizi posted a recent pic to Instagram where he is posing with his close friend Vusi Nova, on Somizi's right hand a ring is clearly visible.

His fans have noticed that Vusi Nova is also wearing a similar ring on his left hand leading to wild speculation.

Somizi and Vusi have been the talk of the Twitter streets for being “unusually” close over the last few months, leaving Twitter puzzled about his relationship with his husband, Mohale.

Around Christmas time, Tweeps went into over-drive, asking why Vusi bought Somizi a birthday cake, when Mohale already got him one. Tweeps went as far as comparing both the cakes to see which is better.

Vusi Nova had to come out to set what he claimed was the record straight on their relationship.

Ever since rumours of 'trouble in paradise' between Somizi and his husband Mohale began to swirl, fans have become "suspicious" of the close relationship Vusi and Somgaga share.

In the latest episode of What’s Your Poison?, a podcast hosted by seasoned broadcaster Jon Savage, Vusi got candid about his life, his struggle with drugs and his relationship with SomG.

“I have known Somizi for 16 years. I met him before I even got into the music industry. He’s so real and supportive,” Vusi explained.

“People out there are saying that we are dating but we’re not dating. We have mutual respect for each other and we trust each other a lot … With us, it’s realness all the way. It’s been 16 years now and we’re still going strong.”